The tragedy in Uvalde has had the entire country grieving. But in the town where the massacre occurred, the funeral processions for the victims have just begun.

There are multiple funerals planned for the next few weeks to lay to rest the 21 lives cut short by the mass shooting.

Amerie Jo Garza was laid to rest Tuesday. Her funeral is the first funeral to take place over the course of the next few weeks in Uvalde, Texas. The mourning will also include joint funerals for two sets of cousins who sadly lost their lives in the shooting.

Amerie’s body arrived at the Sacred Heart Catholic Church in the afternoon. Mourners began arriving even as early as 1.5 hours before mass was set to begin. A lot of mourners were wearing lilac and lavender as it was Amerie’s favorite color. 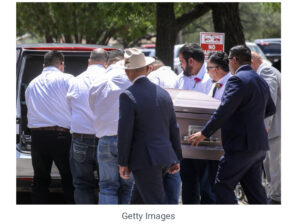 A silver hearse stopped outside the church a little before 2 p.m., followed by Amerie’s family in a matching car. There were six pallbearers who were wearing white gloves with pink flowers pinned to their shirts. They carried Amerie’s casket which was gray with hints of lilac.

The church overflowed with guests there to pay respects to the departed. Church officials had to actively make space on church pews for guests but even with that, some people had to stand outside.

After Mass, Amerie’s casket was transported to the Hillcrest Memorial Cemetery. A few hundred people joined her family in the burial as little Amerie’s body was lowered to the ground to her final resting place.

When most mourners had dissipated, the family released a bouquet of white dove-shaped balloons.

In the days preceding her funeral, Amerie’s family had remembered her for the life she had lived, not for her last day on earth.

They lovingly recalled her as a diva but with someone with a heart of gold. That she had loved her family ferociously and doted on her little brother Zayne unlike anyone else.

The vivacious 10-year-old had dreamt of becoming an art teacher one day. After her death, her mother took to Facebook to post the last picture taken of her baby girl. She posted the picture of Amerie holding up a certificate in recognition of her joining the A-B honor roll. The caption for the picture read you did not deserve this my sweet baby girl. Mommy needs you, Amerie I can’t do this life without you.”

In the town square, white crosses have popped up as a tribute to those who lost their lives in the tragic incident. The Treviño family paid a visit to the cross dedicated to Amerie on Monday and spoke about the girl’s stellar character. 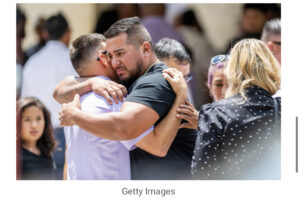 Their 11-year-old daughter who was friends with Amerie has taken her death especially hard and has been inconsolable. “She would stick up for her for the bullies to stop picking on her,” said Treviño who was also Amerie’s cousin.

The day before the funeral a visitation and evening rosary was organized at the funeral home across Robb Elementary. Even strangers stopped by to pay their respects and say a prayer for the departed.

The Hillcrest Memorial Funeral Home which neighbors the school was a place a lot of children who had escaped the shooting sought refuge at.

In the town’s other funeral home, 10-year-old Maite Yuleana Rodriguez’s visitation lasted for two days. Her funeral was next, scheduled for Tuesday night. In this week alone, 11 funerals are anticipated.

The amount of grief everyone in Uvalde is experiencing is unfathomable.

Please join us in praying for the lives taken in the shooting and give condolences to the grieving families and friends.