Frances Buzzard is a highly regarded school janitor and loved by all the pupils and staff at her school in West Virginia.

The 77-year-old meticulously cares for Belle Elementary school, showing up every day with a smile on her face.

But when staff found out that her upbringing wasn’t the usual one kids have today, they decided to organize something special.

Frances had grown up in poverty so there was never any money to celebrate Christmas or birthdays. 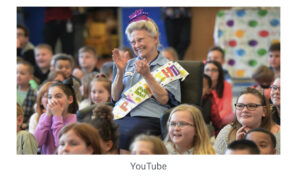 Staff decided to change this and do something special so they organized a birthday party in her honor.

After the cafeteria had been transformed with birthday treats and 200 staff and pupils had gathered to celebrate Frances, they called her to the room.

“Rendell and Ms. Frances, could you please report to the cafeteria?” the loudspeaker requested, according to the Charleston Gazette-Mail.

Frances assumed she was being called to complete a task but couldn’t believe it when she opened the doors and saw what was waiting for her. 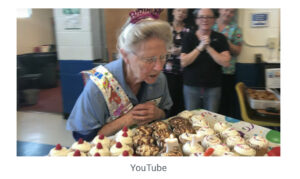 The students cheered and wished her well, and presents were brought out into the hall. The school had also worked on a mini film that included Frances’ face in various famous events that she had lived through.

She was treated like a queen, complete with her own sash and tiara.

Frances revealed that the only gifts she had received growing up were fruits and nuts when her family could afford it.

“Oh, it’s a great big party. I appreciate it, I’ve never had nobody do this for me,” a delighted Frances said.

What a wonderful honor for such a special lady; a memory that will last forever. I hope she continues to celebrate many birthdays to come.