Late that afternoon, he walked through the woods behind his home to meet a friend for a sleepover. But shortly afterward, he was attacked by a monster.

A young aggressor tied Robbie at a tree, poured gasoline on him, and lit him on fire in a horrifying crime in Splendora, Texas, according to ABC.

But thanks to Robbie’s testimony on his deathbed, a boy from Texas could finally get justice after 17 years.

The perpetrator received the maximum sentence allowed — and Robbie’s family was awarded the highest damages ever imposed in the United States. 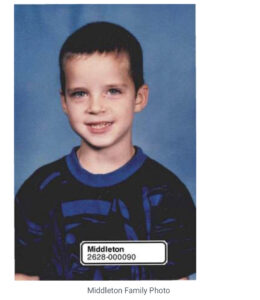 Robbie’s tragic story begins in the state of Texas.

He was an ordinary boy who went to school. But on the day of his eighth birthday, he met a monster that would completely destroy him and his family.

The then 13-year-old Don Collins kidnapped Robbie, tied him to a tree, and poured gasoline on the boy before lighting him on fire.

Robbie was on his his way to a friend’s house when he came across Don, writes Huffington Post.

The inferno left Robbie with third-degree burns to 99 per cent of his body – no-one expected him to survive.

Despite the flames that ate away at his body, Robbie managed to wobble home, collapsing on the street in a ball of burnt flesh.

His terrified mom found him close to death, with severe blisters covering his whole body and skin hanging off his ankles. 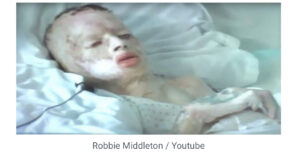 Hospital staff explained for the Middleton family that Robbie wouldn’t survive. He endured more than 150 operations and spent most of his days at a rehabilitation center after his burns.

Although he was severely traumatized and disfigured, Robbie quickly became known for his optimism. 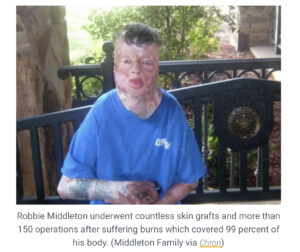 He received a cancer diagnosis that, according to doctors, was directly linked to his many burns. At the age of 20, Robbie’s third-degree burns turned into deadly skin cancer.

US courts ruled that his death was a murder. Don Collins had been suspected of the crime, but was released for lack of evidence – the only witness was an eight-year-old boy.

But on his deathbed, the Middleton family’s lawyer took new testimony from Robbie. He confirmed that Don committed the horrible crime, with the words: “Don did it”.

”Don grabbed my shoulder and poured gas onto my face. After that, I don’t really remember anything.” 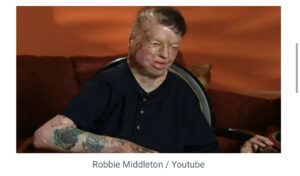 The lawyer recorded his testimony and in February 2015, a court in Galveston sentenced the now 29-year-old perpetrator.

Once sworn in, Collins told the court that he was pleading the 5th Amendment and wished to remain silent. Montgomery County Chief Prosecutor Rob Freyer then made an impassioned plea to jurors that they convict Collins. 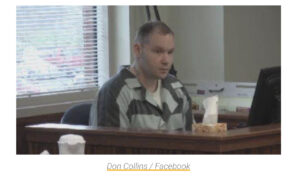 As he was only 13 at the time of the crime, he received the most severe sentence that could be imposed by the state — 40 years behind bars.

“Today that little boy gets to hit back,” said prosecutor Rob Freyer during his final statement in court, according to USA Today.

“Today is the day that you pay.” 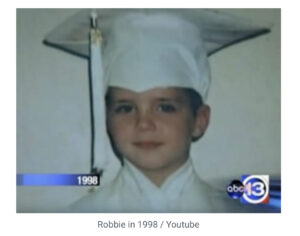 The lawyer reported during the prosecution that the motive for the crime was that Don sexually assaulted Robbie two weeks before the attack.

In the video, Robbie told the lawyer that Don did it to silence him. According to Robbie, just days before he was lit on fire, Collins had raped him in the very same woods.

Eventually, Robbie admitted what had happened. After all those years …

The jury watched the video in which Robbie confessed everything from the hospital bed, 17 days before his death.

Another now grown man came forward and testified that Don also abused him when he was little, according ABC. 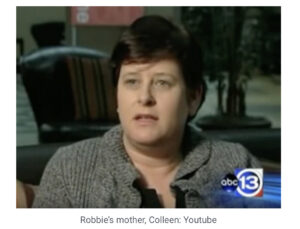 In addition, Robbie’s family received the highest damages ever awarded in the US: $150 billion, states The Telegraph.

But all money in the world won’t bring Robbie back to his family.

In the city of Galveston, Robbie Middleton Day has been established every year on Robbie’s birthday on June 28, to remember him.

Robbie’s story has touched a lot of people worldwide over the years, and his family has repeatedly shared his ordeal with the news.

We must never forget Robbie. That he lived for so long without telling what actually happened …

Even in all of his pain, he found the time and energy to raise money for other burn victims. He was a true hero and he will be missed.

It’s terrible. Don’t ever hesitate to tell someone when something is wrong, either for a friend, teacher, mom, dad, or someone else. Please share this to honor his memory.