Holding on to a career for even a decade is considered an achievement. But those who have been working for the same employer for over half a century certainly do deserve their fair share of recognition.

Bette Nash has a reason to celebrate. She has been working with American Airlines for over 65 years. The Boston native became a stewardess in 1957! And since then, she has traveled thousands of miles around the world every year.

She has been recognized by the Guinness World Records as the longest-serving flight attendant for her service of over 65 years!

Perhaps one of the reasons Bette has stayed at the job is because of the fact that the airline gave her the choice to choose her route. And Bette has stayed loyal to the New York-Boston-Washington D.C. shuttle for most of her career. 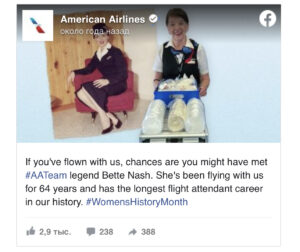 Passengers with American Airlines also adore Bette. Some frequent flyers might also recognize the veteran stewardess because of her long-standing career with the airline.

“I fly hundreds of thousands of miles a year, but these are always my best flights when Bette is on the plane,” a passenger of the airline told the media. 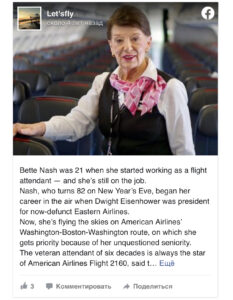 This is not the first time Bette has gained recognition, in fact, she has retained her title. In 2017, she celebrated 60 years with American Airlines, and even at the time she was the world’s oldest serving stewardess.

Now five years later, Bette has set a new record. She recalls how much air travel has changed, talking about how back in the day, they used to hand out cigarettes and matches to passengers! Something we can’t even think about today.

She also talked about the impossible beauty standards stewardesses had to meet. They had to be a certain height and weight, and if they did not maintain their weight, the company would take them off of the payroll!

She really is an inspiration for everyone who wants to start their career in the airline industry.

Share this article with your friends and family to inspire them with Bette’s story.