Melanie Griffith’s life has been quite a rollercoaster. The actress, daughter of actress Tippi Hedren, made her debut on the screen at age 12, and since then she’s starred in several big productions.

While Melanie Griffith’s career kept rolling, her private life was very much in focus. She’s been married three times – including to Antonio Banderas – been in rehab, and raised three children.

Melanie Griffith’s children from her first two marriages – Alexander Bauer and Dakota Johnson – had a pretty rough upbringing, especially considering that they had to go through having a mother who was in a terrible place at the time. But Antonio Banderas made sure to help them in the best way he could as a stepfather, which changed their lives forever. 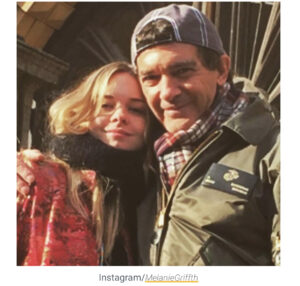 Melanie Griffith was born on August 9, 1957, in New York City to parents Peter Griffith and superstar actress Tippi Hedren, most commonly known for her role in the Hitchcock classic, The Birds.

Melanie Griffith – life, marriages, divorces & struggles
Griffith’s life has been rather incredible, however, tragic at the same time. She’s been involved in a car accident, battled with drinking problems, as well as went through three divorces.

From the start of her life, she was exposed to the pressure of a life in show business. Her mother, Tippi, was, as mentioned, a superstar, and her childhood was extravagant in a very special way.

When Griffith was 7 years old, her mother married agent and producer Noah Marshall. After coming back from a trip to Africa, the couple decided to make a film about lions. An animal trainer gave them a unique idea: to get to know the big cat better, they could welcome one into their home.

So, Melanie Griffith grew up with a pet lion, living with them in the 1970s at their home in Los Angeles, California.

The pet lion, Neil, lived together with the family. Life Magazine documented the extraordinary event, with pictures showing Hedren resting on Neil’s back. The lion even slept under blankets in Melanie Griffith’s bed.

“It was stupid beyond belief,” Griffith later said. 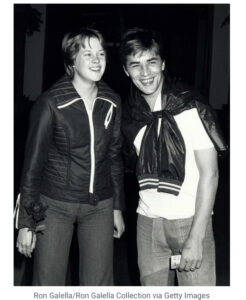 Even though she wasn’t involved in any incidents with Neil, years later, in another encounter, things didn’t end that well.

Met Don Johnson at 14
Melanie Griffith starred in her first commercial before she turned one. She continued to do commercials and modeling work for some years, and at 12, she made her debut in Extra!, even though she was uncredited.

At the age of 14, she appeared in The Harrad Experiment, and on set, she met her first big love. Griffith met actor Don Johnson on set, and the two fell madly in love. At the time, however, their age difference was somewhat controversial. Don Johnson was 22 at the time – eight years older than Melanie – but their love for one another didn’t stop them.

“I thought he was the most beautiful person I’d ever seen,” Griffith said.

Her mother feared for the two because of her age, but eventually gave in. At 15, Melanie Griffith moved in with Don Johnson, and on her 18th birthday, the two got engaged.

“They were two beautiful, wonderful people, and here, my daughter was showing signs that I had never seen before in her, with an older man, and there was just sheer panic,” her mother, Tippi Hedren, recalled. 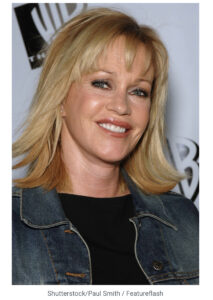 Griffith and Johnson tied the knot in Las Vegas in 1976. And, after just six months of marriage, the two split. However, they would rekindle their romance later on, exchanging vows a second time in 1989.

In 1981, Melanie Griffith starred in the film Roar. Even though her mother and stepfather raised lions to shoot a film, things turned out ugly on the set of Roar. It was very dangerous being in front of the camera, and Melanie got injured.

She was mauled near the eye, and she feared losing her sight. She needed plastic surgery, while her mother Tippi Hedren contracted gangrene and needed skin grafts, according to a piece in the New Yorker.

As reported by The Guardian, Melanie Griffith said that the lioness “didn’t mean to hurt me. Just, after seven years growing up with the lions, I forgot you have to be careful. You can never be sure you’re safe, and just a blow can pop your head like a ping pong ball.”

Melanie Griffith came through the scary incident. She continued to star in movies, however, without any live wild animals. She appeared in Body Double, Something Wild, and The Working Girl, among others, with the last one earning her an Academy Award nomination in 1989. 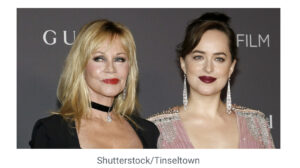 In the 1980s, Melanie Griffith had also found love for the second time. She married actor Steven Bauer in 1981, and four years later, they welcomed son, Alexander Bauer.

Melanie Griffith – daughter Dakota Johnson
Their relationship lasted until 1989 when the couple divorced – with Griffith finding love in Don Johnson again. They divorced again in 1996, after welcoming daughter and now actress Dakota Johnson in 1989.

“You have to understand that we have a tie, and I love him,” Melanie Griffith said. “I will always love [Don Johnson]. But just because you love someone doesn’t necessarily mean that you can live with them.”

Dakota Johnson has become a prominent actress, starring in Fifty Shades of Grey and The Social Network. But because her parents divorced when she was only 7 years old, she had a turbulent childhood. She moved around plenty, went to several different schools and was even homeschooled for a while.

She was often hanging around her parents on film sets from a young age. It made her want to become an actress as well, which she did.

However, the childhood of Dakota Johnson was also filled with much trouble because of her family situation. As a result, she started to go to therapy at age three.

“The whole shebang,” Dakota Johnson told Vogue. “All the help you can get.”

Melanie Griffith – marriage to Antonio Banderas
“I was so consistently unmoored and discombobulated, I didn’t have an anchor anywhere, I never learned how to learn the way you’re supposed to as a kid. I thought, ‘Why do I have to go to school on time? What’s the point when you’re living in Budapest for six months while your stepdad films Evita and you go to school in your hotel room?’ I was a disaster, and I thought for so long that there was something wrong with my brain. Now I realize that it just works in a different way.”

Dakota Johnson’s childhood could’ve become the thing that put her on the wrong foot. However, a new person soon entered her life, who changed everything. Just as she mentioned, she needed an anchor. And that was precisely what she got in her stepfather, Antonio Banderas.

In 1996, the same year as Melanie Griffith and Don Johnson split, Banderas also went through a divorce with Ana Leza, whom he’d been married to for nine years. He had long admired Melanie Griffith after seeing her in Gone Girl and on the red carpet at the Academy Awards.

“The first time I went to the Academy Awards after we got a nomination for Women on the Verge of a Nervous Breakdown, we got on the red carpet, and I saw this blonde woman, and I knew her because I saw movies of her, but I didn’t remember [her name] at the time,” Banderas told Vulture. 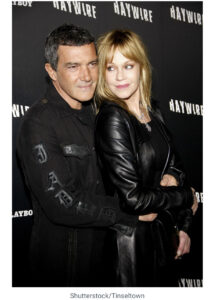 Dakota Johnson’s relationship with stepfather Antonio Banderas
The two met while filming the comedy film Two Much in 1995, and they had one actual thing in common. Both were unhappy in their marriages – and Banderas and Griffith recognized each other’s situations.

Antonio Banderas instantly felt an attraction to Melanie Griffith when working together. He thought she was funny, generous, sweet, and beautiful, and after Two Much, the two stayed in touch. In May 1996, the two tied the knot and welcomed daughter Stella later the same year.

Not only did Antonio Banderas become a father to Stella, but the well-respected actor also became a stepfather to Alexander – from her second marriage to Steven Bauer – and Dakota Johnson.

For both Alexander and Dakota, Antonio Banderas became vital, as they finally got a stepfather who was there for her all the time.

In the beginning, however, Banderas explained that it was difficult for the children to accept him because they didn’t know how long he’d stick around. 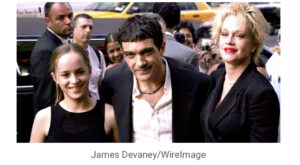 “I was totally inexperienced. Suddenly I had a 6-year-old girl, a 10-year-old boy, and Stella came along almost immediately,” he told AARP. “I was, ‘Oh, my God!’ But as soon as the kids knew that I was there to stay, they were fine. They needed solid ground in which they could grow. As soon as I realized that, I started establishing my relationship, giving them security, little by little doing the father thing.”

“Changed” Dakota Johnson’s life
Dakota and Alexander realized that Antonio Banderas was not a temporary man. He took on the role of their stepfather and helped them in any way possible.

For Dakota, this was especially important. Her childhood had been more than stressful and uncertain. In Banderas, she got a stepfather that taught her many things, including “true passion and discipline.”

During an award ceremony in 2019, when Antonio Banderas received the Hollywood Actor Award, Dakota Johnson and Melanie Griffith presented him with the trophy.

“I come from a family of many a marriage, and I got very lucky,” Johnson said in her speech. “I got a bonus dad who I realized that, over time, is actually one of the most influential people in my whole life. When I was six years old, my mother married a man who brought an unbelievably bright light, a whole new world of creativity and culture, and one remarkably magical little sister into our family.” 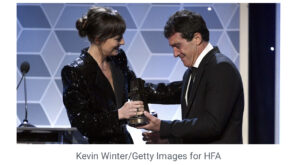 “He loved my mother, and my siblings and I so big, and so fiercely and so loud, that it would change all of our lives together,” Dakota added in her speech.

Strong bond to this day
The relationship between Antonio Banderas and his stepchildren continued to be strong even after he and Melanie Griffith divorced in 2014.

Even though Melanie Griffith and Antonio aren’t married anymore, their family bond will forever be strong. As of today, Banderas is in a relationship with Nicole Kimpel. But as soon as he is in Los Angeles, he makes sure to spend time with his stepchildren and ex-wife.

The divorce between the two in 2014 wasn’t dramatic at all, for which his stepchildren were very grateful for, Banderas explained.

He added that he will always cherish the time he and Melanie had together – and that he always will love her. And regarding his stepdaughter, Dakota Johnson, he is like her biological, very proud father.

“I remember those years as very effervescent and really beautiful. I am not married with Melanie anymore, but she is my family. She is probably one of my best friends, if not the best friend that I have. My family is there, Dakota [Johnson], Little Estella and Alexander,” Antonio Banderas told Vulture in 2019.

“I met her when she was five years old,” he added. “I followed every single step of it. I’m so proud of her. I saw her the other day in Toronto, and she looks — as I said in the social networks when I put a picture of her and myself, I put there, ‘My radiant Dakota.’”