Sadie and Jarvis Sampson tried for years to conceive – they tried everything until they resigned themselves to thinking they would only ever be an aunt and uncle, until they received a text which changed their lives overnight.

The couple had been trying to conceive since they married in Jan. 2018 but when it didn’t happen naturally they tried everything else.

“We even tried the unsolicited advice of friends, family, and strangers and didn’t try. For 14 months, we tried, prayed, and waited. Month after month. Negative pregnancy test after negative test. It seemed like we were going to need assistance to conceive. We even went as far as to talk to doctors about it.” 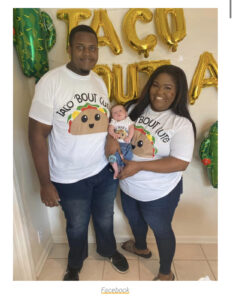 Doctors didn’t seem to offer the couple much help. They all told Sadie to lose weight and she would conceive so with no other advice to go on she had gastric surgery and lost 28 pounds.

Sadie’s OBGYN shared her excitement at the weight loss and told Sadie how proud she was of her.

“She told me that if I wasn’t pregnant within six months then she would refer me to a fertility specialist, because she couldn’t prescribe me the fertility medication,” Sadie said. “I was over the moon about that. Finally, we got something other than a no! We got a ‘not right now,’ and we were thrilled.”

But sadly the couple didn’t get pregnant as they thought they would after Sadie lost the weight and they felt like they were back where they started.

“I had always felt like I was born to be a mother,” Sadie shared. “My surgeon had taken so much time to warn me about how fertile I would be after surgery, but I still wasn’t pregnant. So, we gave up. We realized that we were only destined to be an aunt and uncle to our nieces, and godparents to our goddaughters.”

Just when the couple had decided to give up their heartbreaking attempts to conceive, Sadie received a text from her friend asking if they would consider fostering a baby that a couple she knew were considering for their baby.

The couple were hesitant at first as at that point they were told by a caseworker to take care of the baby while the mom sought treatment. The couple were worried they’d get too attached to the baby. But shortly after that story changed.

“The birth mom decided she would like you guys to adopt the child instead,” the caseworker said. 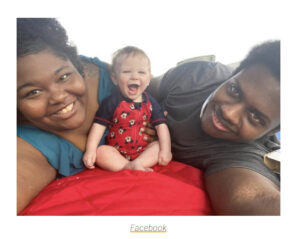 “‘Holy crap!!,’ I said aloud,” Sadie recalled of the moment she found out she was going to be a mom.

“We went from not having any children, to the possibility of fostering one, to, ‘You guys are parents!,’ overnight. I listened to the case worker as she talked, still in disbelief. I hung up and called my husband! ‘Babe!! They want us to adopt the baby! They want us to be parents,’ I screamed. ‘Wait! REALLY?! I thought they just wanted us to foster him!,’ he said. ‘Nope! They want us to be his mom and dad,’ I said.”

The couple had a weekend of absorbing the shocking news but also preparing themselves just in case the mom changed her mind.

Monday came and the couple were not only told the mother still wanted them to adopt the baby but that she wanted to do an independent adoption and was ready to sign that day. 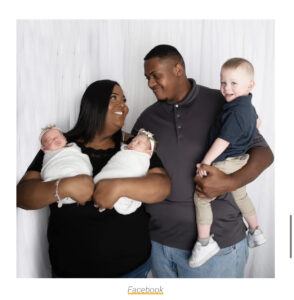 Their baby boy had been born at 33 weeks, seven weeks early. He was 4 lbs., 5 oz. “He literally fit in one of my husband’s hands,” Sadie wrote.

“He was so tiny, swaddled in a white blanket, with pink and blue stripes,” Sadie added. “He had an NG tube coming out of his nose because he couldn’t eat on his own since he was premature. But my oh my, was he cute!!!”

The couple shared their news on social media and was encouraged to make a registry. They listed 72 items and after just three days 55 had been bought for them. 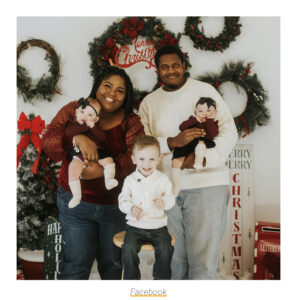 Ezra Lee’s adoption was finalized in October 2020 and the couple had the most adorable photos taken of them as a family wearing t-shirts which said “families don’t have to match.”

In 2021, Sadie and Jarvis became parents to twin girls Journee and Destinee through embryo donation. Staying true to their family motto, “Families don’t have to match,” the black couple became parents to three white children – a boy and two girls.

For anyone who judges this beautiful family they have just one response: their family is built on the most robust foundation ever – love.

Such an inspiring story from a beautiful family who have a lot to teach the world. Please share.