Devastated mother fights back tears while speaking at the funeral for husband, 3 kids murdered by her own brother

A mother and son have only each other to lean on for support after a violent incident took away four members of their family. The mother, Loretta Traynor has to live the rest of her life knowing that it was her own brother responsible for the tragic death of husband and their three beautiful children.

At their funeral, 50-year-old Loretta sat in her wheelchair just a few feet away from the four caskets of her husband and children and said they were “taken too soon, too violently and without warning,” as quoted by CBC.

“In no way, shape or form can I believe that good will come out of this tragedy. I can’t and I won’t accept it,” she said while her only surviving son, Sam, stood next to her, as reported by CTV News.

Loretta Traynor is now eulogizing her husband and 3 children. “They were four wonderful people. I’ve been blessed and moved by all the loved you have shared” says Loretta thanking all those who have reached out and shared memories since the murders. Even strangers, Loretta says pic.twitter.com/1hPXFUT6bW

When her family was shot dead, Loretta was also left severely injured by the shooter, Mitchell Lapa. 48-year-old Mitchell, Loretta’s brother entered their home in Oshawa, Canada “uninvited” before shooting the family down, according to Durham Regional Police, as reported by the Toronto Sun.

“Lapa was the sole shooter in this incident and he died as a result of a self-inflicted gunshot wound,” the police said.

Here’s background on this heartbreaking case that has affected thousands who are mourning for this well-known Oshawa family killed in an apparent murder-suicide. Chris Traynor was a schoolteacher as is his wife Loretta https://t.co/MCXFrw2HdY

While talking about Mitchell, the friend also said, “Even as a kid growing up, Mitchell was a couple of years younger than me — always in and out of trouble. And that was from a point of view of a teenager who was able to see that all that time ago. I am not surprised of what I’m hearing… He was mentally unstable.”

It was also reported that after the death of Loretta’s father, she and her children inherited most of their father’s assets while her brother, Mitchell was cut out from it for the most part, as reported by CBC. He decided to get back at his sister by taking away her husband of over 20 years, Chris and their children.

After Mitchell launched the violent attack on Loretta’s family, he has left her devastated from the loss, and heartbroken from the death of her three children, 20-year-old Bradley, 15-year-old Adelaide, and 11-year-old Joseph. Her oldest son, Sam survived because he was not at home when the gruesome attack took place 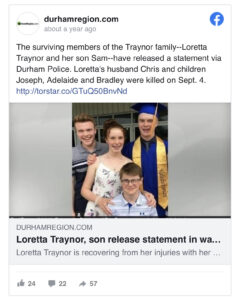 “They were the best of me,” Loretta said at their funeral. “I have lost so many parts of me that make me a better person.”

The grieving mother added, “My last words to each of them was that I loved them.”

Her oldest son, Sam, who was not at home during the violent shooting that killed his family members, said, “The happiness that they brought us is greater than any evil,” as quoted by CBC.

HAPPENING NOW: A funeral is being held for 4 members of an Oshawa family slain in a mass shooting. Wounded survivor Loretta Traynor holds hands with son Samuel as the caskets of their loved ones arrive at St. Mary of the People Catholic Church https://t.co/p5jPftIM6t pic.twitter.com/AUQjwfbFP2

As Loretta sat in her wheelchair at St. Mary of the People Parish in Oshawa, according to CTV News, she told the service-attenders that the death of her husband and children has sent her to “dark places.” But she also added, “…what I have to take with me is that light that I have found from all of you. You have given me a lens into my family’s lives that I didn’t have and that is a gift for which I am forever grateful.”