It’s always heartbreaking to see a dog with a tumor, especially one that has gone unchecked and untreated. Tumors can grow shockingly large, causing a great deal of discomfort for these poor animals.

Like one dog, who was surrendered to a shelter with a massive tumor, but thanks to some kind rescuers, this dog has now gotten a second chance.

A dog named Hattie was surrendered by her owners to a local shelter, and they were shocked to see the massive tumor on the dog’s side.

The owner was apparently surrendering Hattie for euthanasia, but instead the dog was given a second chance. Needing a lot of care, she was taken to Dallas DogRRR – Rescue.Rehab.Reform, who were shocked by the dog’s condition.

In a Facebook post they said it “may be the worst owner surrender we have taken in,” and said Hattie’s owners let the tumor grow for two years without doing anything about it. No charges were filed.

While Hattie’s family clearly neglected her health, she was now in good hands. The rescue scheduled Hattie a surgery with Vet Ranch.

Despite everything she went through, vets found Hattie to be in good spirits. A vet explained that she has learned to live with the massive weight on her side

“It’s just so sad to me that she’s used to just dealing with this,” Hattie’s vet said in a video shared by Vet Clinic. “She just goes day in and day out dealing with this like it’s a bean bag chair, even though she has this on her.”

Vets performed the surgery, removing the giant tumor. Dr. Karri of vet ranch wrote on Facebook that it took “three hours to get that beast off,” but the surgery was a success and Hattie was “resting comfortably.”

“She was 41 lbs and now only weighs 26!” the vet wrote. “I can’t wait to see how her personality changes without carrying this burden anymore.”

After Hattie’s story went viral, followers asked for an update about Hattie’s health — and Dallas DogRRR reported that the sweet dog had a very happy ending.

They wrote that in the year since her “bowling ball size tumor” was removed, Hattie has found a loving home!

“She was happily adopted, and once again, a lost and abandoned animal has found their happy ending,” the rescue wrote.

Photos show Hattie in her new home: she seems happy and comfortable and has another dog to play with.

It’s heartbreaking that Hattie went through so much discomfort and that her owners didn’t get her treatment sooner, but we’re glad she’s now happy, tumor-free and in a great new home.

Thank you to all the rescuers and vets who gave Hattie a second chance! Share this story! ❤️ 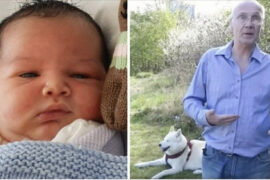 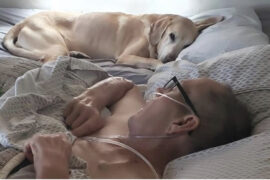 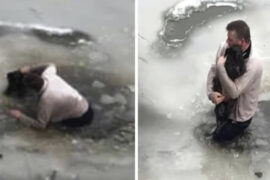