Dustin Hoffman’s wife, Lisa, knew she wanted to marry the actor when she was only 10 years old

Do you believe in fate?

While there are some instances that I do, one area that I find it hard to believe is Hollywood relationships. So many end in divorce after divorce.

But after hearing the love story of Dustin Hoffman and his wife Lisa, just like myself, you may rethink how fate works in Hollywood. 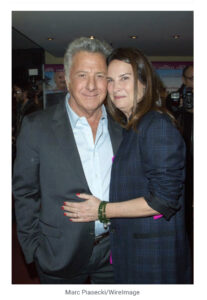 The story goes that Dustin’s mother and Lisa’s grandmother were good friends and saw each other often as they lived in the same apartment complex in Los Angeles.

Dustin, who initially wanted to be a classical pianist, even performed at Lisa’s parents’ wedding while her mother was pregnant with her.

The couple joke that Lisa must have heard Dustin playing and fallen in love with him at that moment.

It wouldn’t be until many years later when a 27-year-old Dustin found himself hanging out with a 10-year-old Lisa and her 8-year-old brother that she had a feeling he’d be in her life forever.

“Dustin was telling us jokes, playing the piano and encouraging me to dance around the living room. After we got together, my grandmother reminded me that later that day I had said, ‘I hope he waits for me because I want to marry him.’” 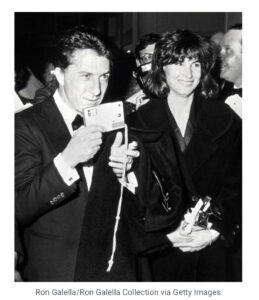 Dustin, who had been living in New York City, would often return to Los Angeles to visit family as well as Lisa. During a visit, he and Lisa realized they had a connection.

“My grandfather had recently passed away and Dustin came to pay his condolences,” Lisa said, per the DailyMail. “That first look and I knew.”

During their first date Dustin asked how many children Lisa wanted.

“I said six, and he said he had two already, so would four be OK. And that’s exactly the way it has played out.” 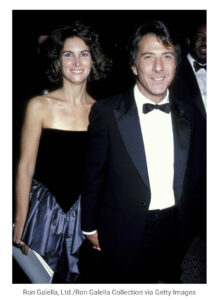 At the time the two became a couple, Lisa had just begun law school. Despite realizing the difficulties her attending school while Dustin continued his career would create, she finished her degree.

“I knew that having a law career wouldn’t be possible once I started traveling around with Dustin, but I also knew that I needed to complete this one thing for myself,” she said.

The couple married on October 12, 1980, and Lisa graduated from law school the following year.

The Hoffmans’ welcomed their first child together three weeks after Lisa took her bar exam.

Jake was a month premature and born critically ill with Hyaline membrane disease [where a baby’s lungs need urgent treatment because they aren’t fully formed], so mothering became my focus,” she said. 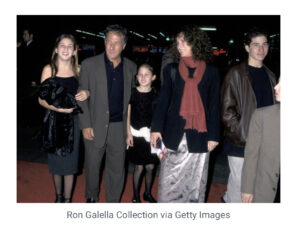 As their children grew up they traveled the world and followed Dustin as he filmed one film after another.

“It was important to Dustin that we were together as a family. For both of us, that was the point of being married.”

The family’s “traditional” values helped shaped their children’s future as they now “pay their own way while they pursue their careers.”

Although Dustin has enjoyed a massive career, Lisa has managed to stay out of the spotlight. As their children grew up, she prioritized them, but now that they have all grown up, she’s working on what it looks like to be Lisa Hoffman. 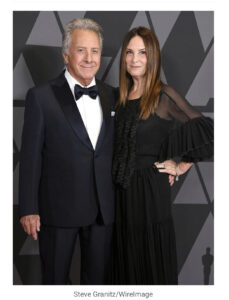 This year will mark 42 years since Dustin and Lisa got married, and their love for each other is as strong as ever.

These two have a rare Hollywood love story. I hope they continue to celebrate many more happy years together.

Please share this to celebrate their love for one another.