Family and friends of a Florida man who was killed in a motorcycle crash that left his 8-year-old son seriously injured have gathered for a candlelight vigil and ride in his memory.

David Parham was killed Friday afternoon in a motorcycle crash. According to a Florida Highway Patrol report, a 71-year-old driver pulled out in front of him while he was riding his Harley Davidson motorcycle with his young son.

The 41-year-old leaves behind his 8-year-old son Jase, his teenage stepdaughter, and his wife of almost two years.

“He was a great guy, loved his boy, loved his family, [would] do anything for anybody,” his brother Kenneth told News Channel 8. 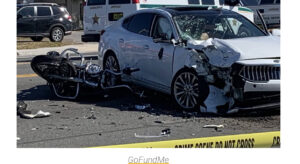 “Dave was outgoing, sweet, caring, kind, loving, loved everybody. He was a big teddy bear,” his cousin Heather Rhyne said.

“It killed us. It crushed us. This is something you don’t want to happen in your family,” she said of the accident which killed her cousin.

Parham’s young son is still recovering in the hospital from serious injuries including a cracked pelvis. He’s on a ventilator and hasn’t been told his dad has died.

“It is going to be tough. The last thing he did is call out for his daddy,” his cousin added. 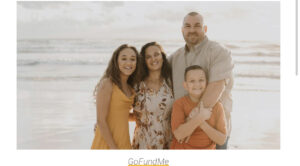 A GoFundMe has raised more than $2,000 toward a $50,000 goal to help Parham’s wife with unexpected costs and to allow her to focus on visiting her son who is in the hospital an hour away from their home.

The family said David had started a new job three months before his accident so he had no benefits or life insurance.

Family members have also created t-shirts, koozies, and key chains in Parham’s honor and memory. Any money raised will also go to his wife to help with unexpected costs and hospital bills.

“It is hard, going from a wife with a loving husband and two children to being a widow with two children and trying to do it on your own,” his cousin added.

‘Just take that extra second. You could save a life’
Officers say the 71-year-old driver has not been cited as of Tuesday, but charges are forthcoming, as per the news outlet.

Parham’s family are asking drivers to be cautious on the roads.

“Just take that extra second. You could save a life.” 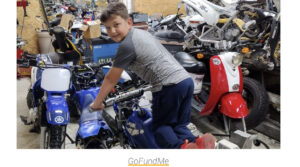 My heart goes out to this man’s family. May he rest in peace.

I hope his young son makes a full and speedy recovery and the family get all the support they need through this difficult time.