Hero nanny dies saving toddler: “We will forever consider her the guardian angel of our son”

52-year-old Arcellie “Celi” Muschamp tragically passed away on January 1 after remaining in a medically induced coma since December 20.

A nanny has been dubbed a “hero” after she bravely saved the life of a child, who she had been looking after. 52-year-old Arcellie “Celi” Muschamp tragically passed away on January 1st after remaining in a medically induced coma since December 20. According to PEOPLE, Muschamp was hit by a 2011 Dodge Ram pickup truck that was making a left turn onto Union Street in Park Slope, Brooklyn.

New York City Police Department revealed that Muschamp was crossing the road at the time with one-year-old Rowan, who was in a stroller. When she realized that the vehicle was about to hit them, she put herself in harm’s way by pushing the stroller out of the truck’s path. At the time, the toddler’s parents, Patrick Mullen and Katie Duhaime, created a GoFundMe page for their nanny to help raise funds for her treatment.

“Our wonderful, loving nanny Arcellie (Celi) Muschamp was struck by a vehicle while crossing the street with our son Rowan…They had been on a clearly marked crosswalk at the intersection of Union St & 5th Ave and correctly crossing with the pedestrian right of way but the vehicle failed to yield. Celi is currently hospitalized with critical injuries at New York-Presbyterian Brooklyn Methodist Hospital and we are seeking to raise funds to assist her family with costs related to her medical care and recovery,” it read. 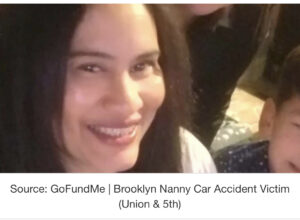 But on January 1, 2022, they posted an update that revealed Muschamp’s tragic demise. “Sadly, Celi passed away yesterday as a result of her injuries. We are truly heartbroken by this loss of such a wonderful soul and know she is now watching down over us all. We have been humbled and overwhelmed by the amazing outpouring of love, support and kindness for Celi and her family,” wrote Mullen, who described Celi as “a loving wife, mother, and sibling who has been a resident of the Park Slope neighborhood in Brooklyn for many years.”

In the initial post, he shared how, “Our son Rowan was amazingly unscathed in the incident and based on eyewitness accounts Celi helped save him from almost-certain serious injury or death by pushing his stroller out of harm’s way as the vehicle approached.” Mullen continued, “The doctors have called it a miracle and Celi is truly our hero.” During a previous interview with the New York Daily News, Katie said that their nanny was “super-loving” and that she had been working for her family for a year. 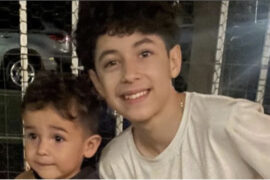