Jock makes the news after asking teen with disability to prom, gives her a night she will remember forever

Prom is a huge event for many young people, especially in the United States, where preparations start almost a year in advance. For one night, young boys and girls dress to the nines and feel like princes and princesses.

But if you don’t have a date, the whole event can instead feel like one big lump in the stomach, especially if you are an insecure teenager.

When it was time for prom at Fort Zumwalt West High School in O’Fallon, Missouri, there was a guy who many girls dreamed of being their date.

The 18-year-old Brendan Ritchie was a straight-A student, a handsome athlete, and a member of the school’s cross-country squad. So you can understand that he was popular among the girls and his classmates.

Of course, there are also a lot of stereotypes about a jock, but that was not Brendan.

He did not intend to choose his date based on who was the most popular at school. Instead, he had completely different criteria and based his choice on something more genuine: Friendship.

That’s also why the 2016 prom at Fort Zumwalt West High School came to be an event to remember forever.

During their years at the school, several students had gathered at the same lunch table as soon as they got the chance. They were all friends and got to know each other very well during the years in school.

Ellie McCool was one girl in this gang. 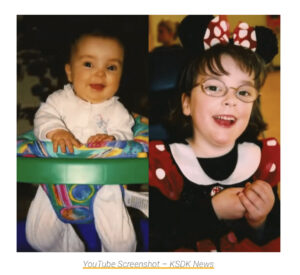 She was born with Rett syndrome, which meant a lot of challenges for her. Rett syndrome is a rare genetic neurological brain disorder that occurs primarily in girls. The condition affects the development of the brain and nerves, which causes severe motor and intellectual disabilities.

According to Elli’s mother, Mickie McCool, her daughter grew up like any other toddler.

Everything seemed normal during her first year of life.

“She sat up on time, rolled over on time, fed herself with both hands, played with toys,” her mom Mickie McCool told KSDK.

When Ellie turned four, something happened. It was like some parts of her body just shut down. Mickie realized something was seriously wrong, and after a while, Ellie was diagnosed with Rett syndrome.

“Still, she’s smart and totally in there,” Mickie says.

Even though some of her body parts did not work properly, Ellie was still the same wonderful girl deep down. But, unfortunately, her condition made it harder for Ellie to express herself verbally.

It would have been easy for people to ignore Ellie, but instead, she found some fantastic friends at her high school. They included her and made her their friend.

For example, Ellie got to know Nicole Orf. They became best friends, and Nicole described Ellie as an intelligent, kind, and caring girl – despite her difficulties in communicating.

Ellie had always been close to a smile, and her joy of life inspired many – so it was no wonder that she made friends and that everyone wanted to sit with her at the lunch table.

Brendan was one of the people at school who really appreciated Ellie’s company. When he thought of the courtesy and kindness she had shown him over the years, his choice became easy when he thought about a date for the prom.

But he also wanted to do something extra in connection when he popped the question. Brendan knew that Ellie’s favorite movie was Iron Man, the superhero movie based on the Marvel Comics character of the same name.

Therefore, he planned to dress up as the superhero and ask Ellie in front of the entire cafeteria.

Wore her most beautiful dress
“Ellie, do you want to be my Iron Woman at the prom?”, the sign read, which Brendan showed in front of the entire school cafeteria.

Of course, Ellie was stunned and overwhelmed. Like all other girls, Ellie had dreamed of going to the prom. She said “yes” and would soon get a memory that she could cherish for the rest of her life.

“Every girl dreams of having a date to her senior prom,” Ellie’s friend Elizabeth Steiner said and continued:

“So the fact that Ellie was going to have one too was awesome.”

Ellie’s family and friends were really looking forward to the big night, and everyone was so happy for her. She prepared everything and wore her most beautiful dress before Brendan would pick her up. 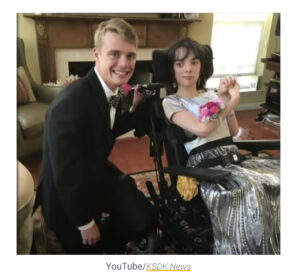 All the friends from the lunch table were also present at the prom and could share this unforgettable evening with Ellie. They danced, took pictures, and had a lot of fun together.

“She’s just a really awesome girl and she deserves to go to prom with someone and I felt if it was going to be anybody, I’d like it to be me,” Brendan said. 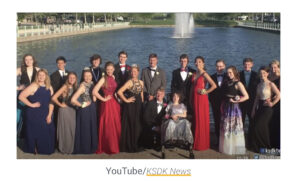 So wonderful to see! Brendan could have chosen any girl at school, but he saw Ellie for who she was, and the most important thing for him was to give her an evening to remember – talk about a gentleman!