Judge Judy remarried her husband in 1990 – together – they raised 5 kids, 3 of whom are following in her tracks

“The cases are real. The rulings are final. This is Judge Judy.”

For 25 years, Judy Sheindlin, better known as Judge Judy, has graced US televisions presiding over some of the most clear-cut court cases and others that have left her saying, “I eat morons like you for breakfast.”

Her show, Judge Judy, has won three Emmys and achieved some of the highest ratings among syndicated television. It’s also made her one of the top highest-paid TV show hosts.

But with news that Judge Judy will finally be coming to an end, what does the 79-year-old have in mind for the future?

Fans will be excited to know she has no plans to retire, at least not yet.

“I’m not tired. I don’t play golf or tennis. I have no desire to learn how to play mahjong, chess or checkers. I know what I like to do,” she told The Hollywood Reporter.

Road to the top
Judy Sheindlin was born on October 21, 1942 in Brooklyn, New York to a father who was a dentist and a mother, who she described as a “meat-and-potatoes kind of gal.”

She attended James Madison High School in New York and after graduation went on to American University in Washington, DC where she majored in government. Following her time at American, she went on to pursue a law degree at New York Law School.

She graduated in 1965 and passed the state bar the same year. She was hired shortly after graduation as a corporate lawyer for a cosmetic firm. But within two years she realized the life of a corporate lawyer was not for her and she left her job.

Husband and children
After leaving her first job, she spent time raising her two children with her first husband, Ronald Levy.

Judy tied the knot with Levy, a juvenile court prosecutor, in 1964. The couple moved in together in New York and had two children: Jamie and Adam.

”I was 20, almost 21. So I became a mom … All my friends were getting married, there was still those pressures even in those years,” Judge Judy told Fox News in 2017. 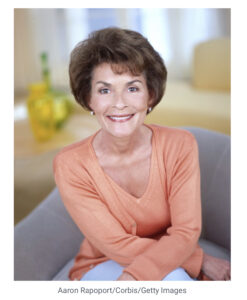 She also spoke highly about her first husband, but there were also some tensions in the relationship. By 1972, she had found a new job as a prosecutor in New York’s family court system.

She divorced her first husband in 1976, after 12 years of marriage.

”My first husband is a lovely, lovely man but he always viewed my job as a hobby and there came a time where I resented that,” she said.

By 1976, Judy had a difficult time being there for her children while also handling the sometimes emotional family court cases. However, less than six months later she met Jerry Sheindlin, an attorney. 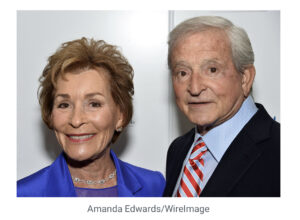 The couple married in 1976 and Judy wasn’t only blessed with a new, loving husband – she also became a stepmother to Jerry’s three children from a previous relationship; Nicole, Gregory, and Jonathan Sheindlin.

The relationship hit some bumps over the years. In 1990, Judy and Jerry divorced. It was a brief split, however, and they remarried in 1991.

Judy and Jerry are now in their 45th year as spouses, and together they have helped raise 5 children. Three of them have also followed in their parents’ footsteps and made a career in the legal profession. Adam, Judy’s son from her first marriage, works as a district attorney in Putnam County, New York. 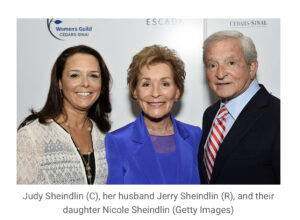 Judy’s stepchildren, Gregory and Nicole, pursued a career as lawyers and have certainly been inspired by their parents.

In addition to this, the child-loving Judy also has 13 grandchildren that she likes to treat with a lot of love.

”I spoil them,” Judge Judy said in 2015. “I’m trying to think of how we don’t, but the answer is we do. We don’t even think we’re doing it, but their parents are very smart. They try to put the skids on it.”

But let’s head back to her career journey. Sheindlin quickly made a name for herself, and in 1982 New York Mayor Ed Koch appointed her as a criminal court judge.

Within four years she received a promotion as a supervising judge within the Manhattan division of family court.

From the courtroom to television
By the early 1990s, her no-nonsense attitude in New York began attracting nationwide attention.

She appeared in The Los Angeles Times and was featured on 60 Minutes. From there she connected with an agent and began the journey to becoming one of the most recognizable judges on television.

Following her appearance on 60 Minutes, she accepted a book offer, and the no-nonsense judge wrote about her experience with the court system.

From there she was offered an opportunity to preside over her own courtroom series. At the time The People’s Court was on the air, a show she had previously tried and failed to host.

But, in the end it worked out for her because she was given her own show on CBS. Sheindlin wanted to call her show, Her Honor, but the production company wanted to call it Hot Bench.

In the end, they settled on the name we’ve all come to recognize for the past two decades, Judge Judy.

Judge Judy
Since the beginning, Sheindlin’s courtroom series has remained among the top rated courtroom shows. There was a time her show began to beat The Oprah Winfrey Show, and then it continuously led the ratings over Oprah Winfrey‘s show for more than a decade.

Currently her show, which is syndicated to local TV stations, is watched by an average of 8 million viewers a day.

There’s just something about her tell-it-like-it attitude that constantly draws people in day after day.

And that’s led her to quite the hefty compensation, which she said “has not been a secret.”

According to Forbes, it’s estimated that Sheindlin is worth $445 million, and that’s largely due to the $47 million salary she’s been earning since 2012. And that’s with filming only 52 days of the year!

While she hasn’t said what Amazon is paying for her upcoming show, she said, “the folks at Amazon understood what the parameters were.”

She ranks as one of the US’s richest self-made women. In comparison, Ellen DeGeneres was worth $370 million in 2020 while Oprah Winfrey, who previously competed with Sheindlin during daytime television, but now runs a media and business empire, was worth $2.7 billion as of May 2021.

Next Chapter
In March 2020, Sheindlin announced the end of her iconic show.

She shared the news that CBS “wanted to optimally utilize the repeats of my program, because now they have 25 years of reruns” during an appearance on The Ellen DeGeneres Show.

While some fans may want more, and they will just not in the same format, Sheindlin believes it’s time to say goodbye to the show that’s been on the air for 25 years.

“I like to see things tied up in a bow. Perhaps that’s the reason for ending the show after 25 years,” she told The Hollywood Reporter. “Nobody says, “Oh, they did that show 27 years.” That’s not a number! Plus, it’s always good to leave everybody wanting a little bit more.”

She also announced that while Judge Judy would be coming to an end, she was not ready to retire.

“Why, at my stage in life, would I try to find something else when I already know what I like?” she said. “And this isn’t a 9-to-5 job. I’ve still got the time to see the children I love, the grandchildren who are growing up very fast and the cute mate who I still get a kick out of.”

In the late summer, Sheindlin will begin production on a new show, Judy Justice. It’s expected to be a similar format as Judge Judy, an arbitration-style reality show, except this one will premiere on Amazon’s IMDb TV.

She’s expected to deliver a certain number of episodes to Amazon by the end of the year, and then it will be determined when the show will air.

“Give me a robe and a case, and I’ll do my job. I had wonderful people producing and directing the Judge Judy program, and a couple of them will be following me to Amazon. That will keep my life on a steady keel.”

I love Judge Judy and while I’m sad to see her show of 25 years end, I’m excited for her new show!