Imagine watching your local news and seeing a person whose features looked similar to yours. We all supposedly have a doppelgänger, so it’s not that far-fetched.

But when Randy Waites saw a man named Eddie Waites on KCRA in December 2021, he became suspicious, and so did his daughter.

“I saw [Eddie’s] features and he actually looked a lot like my dad in the eyes. I did my research, searched up his name, looked up all I could,” Randy’s daughter Cambria told KCRA.

Not only did the two men share the same last name, but they shared the same father. They were long-lost brothers! 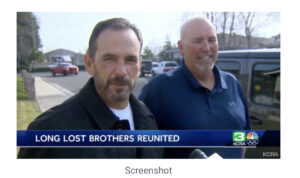 In late December, Eddie, who lives in southern California, appeared in a news segment on KCRA about snowfall in Lake Tahoe.

Randy, who lives in California’s Central Valley, happened to be watching the news when the segment aired and wondered if the similarities he shared with the man on TV were a coincidence or if there was something more.

With the help of his daughter he was able to find Eddie’s phone number, and the two connected.

“It was an instantaneous chill all the way from my head all the way down to my toes,” Eddie said. “At first I thought, it’s not possible. Once I seen a picture of him, I seen my dad. I seen our dad. I knew it was real.”

The two long-lost brothers recently met and were able to fill each other in on the parts that the other missed out on.

“This is almost an out-of-body experience,” Eddie said. “The whole thing is surreal. To have not only a brother, but a family I never knew existed is beyond words. It’s unbelievable.”

Randy Waites of Lodi never expected to find a new family member by watching the local news. Today, he connected with a brother he never knew he had after spotting a familiar last name on @kcranews. It was an honor to be there to capture this special moment. pic.twitter.com/4QTdic8N6q

Such an incredible way to find your brother! I hope these two and their families are able to make up for lost time.

Please share this heartwarming story with your friends and family.