The CEO and general manager of the Metropolitan Atlanta Rapid Transit Authority (MARTA), Jeffrey Parker, has tragically passed away. According to members of the MARTA Board of Directors, he died by suicide.

Bill Floyd, a member of the MARTA Board of Directors, revealed that Parker died by suicide on Friday after stepping in front of a speedy train at the East Lake MARTA station in Decatur, Georgia. Parker, who had over 35 years of experience in both the private and public sectors of the transportation industry, became the CEO and general manager of MARTA back in March 2019.

In recent years, he was helping MARTA in taking on its “most ambitious transit expansion and modernization program since its founding forty years ago,” according to its website. Parker’s untimely death was announced on Saturday by chairwoman Rita Scott, who described him as “an outstanding leader and steward of MARTA whose passing leaves us all heartbroken.” 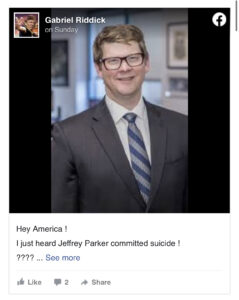 “As Chairwoman and on behalf of my fellow MARTA board members, we are devastated at this loss as we valued Jeff’s leadership and looked forward to him bringing his vision for transit to fruition,” expressed Scott. “The entire metro Atlanta region owes him a debt of gratitude for his transformational efforts and we will not stop working to build on the foundation he created.”

According to PEOPLE, she added, “As we struggle to understand the complexity of this tragedy, we grieve with and for his wife Erin, his daughters and all of Jeff’s family and friends as well as his MARTA family.” The Amalgamated Transit Union Local 732 expressed its extended condolences to his family in a statement shared on Saturday.

“Parker understood the importance of MARTA and public transit for our city, our members, and our citizens,” shared President of the ATU Local 732, Britt Dunams, on behalf of its 2,500 union members. Dunams explained that they had recently been working with Parker “to further strengthen the relationship between our Union and management that recognized the critical role our members have played in keeping our communities moving through the challenging times of the pandemic.”

The union swore to continue its efforts “and strive to make MARTA safer, more accessible, and more affordable for all Atlantians” in Parker’s memory. Even Georgia’s governor Brian Kemp was shocked by Parker’s death as he took to Twitter to honor the late CEO.

“Marty, the girls, & I are saddened to learn about the tragic passing of Jeffrey Parker – GM/CEO of MARTA. In addition to a remarkable professional career in the public/private sectors, Jeffrey was known for his civic engagement and support for the advancement of his communities,” he wrote.

“He had an incredible mind for transportation and logistics and a heart for people. He will be greatly missed. Our thoughts and prayers are with his family, friends, and his many colleagues,” it continued. Collie Greenwood, who had been serving as MARTA’s Deputy General Manager, has been named interim CEO by the MARTA Board of Directors.