Kindness can go a long way. This is something that has been proven time and again. It is so important to impart this life lesson to our children.

This mother’s experience showed that asking your children to be kind and empathetic can go a long way.

Cassandra Ridder from Westminster, Colorado, noticed that her 12-year-old son, Brody Ridder was not his usual self after she picked him up from school. Her son who is normally cheerful and talkative requested that music be played.

Trying to cheer him up, she decided to ask him about his yearbook. The sixth-grader was due to bring home his yearbook according to an email she had gotten that morning. She asked her son if he had gotten a lot of signatures.

This is the question that brought tears to the young boy’s eyes and he started crying.

“He said that he’d asked the kids in his class if they would sign his yearbook and some flat-out said no,” his mother revealed. “A couple of his classmates jotted down their names — but there were no messages. There was nothing about how smart, funny and awesome he is,” she added.

What a heartbreaking it must be to learn that your child felt so left out and ostracised by his classmates!

Nonetheless, the 12-year-old handed his yearbook to his mother. What she saw broke her heart further. She said her sign had signed the yearbook himself.

“He’d written a note to himself. It read, ‘I hope you make some more friends,’ and he signed his own name,” she shared.

Ridder believes her son’s interests are much different than those of his peers. He loves chess, fencing, and dinosaurs. Because of these interests he has had a hard time making friends and often sits alone at lunch and plays on his own at recess as well. 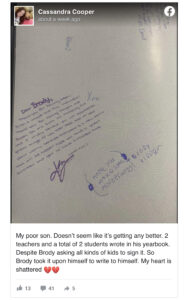 She says he gets teased for his physical appearance. Kids often make fun of his “ears sticking out” and that he is “extremely thin” shares his mother. She noted that her son would cry to her every other day about this treatment.

But on May 24th, after learning that no one signed her son’s yearbook, she had finally reached her tipping point. She decided to take her anger and channel it to Facebook. She decided to post on the school’s Facebook page for parents of students.

She posted a picture of her son’s yearbook which was scarcely signed.

She captioned the picture, “My poor son. Doesn’t seem like things are getting any better. 2 teachers and a total of 2 students wrote in his yearbook. Despite Brody asking all kinds of kids to sign it. So Brody took it upon himself to write to himself. My heart is shattered. Teach your kids kindness.”

She posted it and did not give it much thought after that. But the next day, she received a surprise text from her son.

The text read, “Facebook this,” and it was accompanied by a picture of his yearbook brimming with signatures and well-wishes from dozens of people. He got messages written from people in the 8th grade to 11th grade.

“Brody’s exact words to me were, ‘This is the best day ever.’ Some kids even put their phones for Brody to contact them,” his mother shared.

The messages were both sweet and encouraging. One read, “Hey buddy, never change, never put your head down,” while another read, “Brody — you are the kindest little kid. You are so loved. Don’t listen to the kids that tell you different.”

His ecstatic mother shared that his classmates who refused to sign the day before, lined up to sign his yearbook as well.

Brody is now incredibly happy and excited at the opportunity of being able to make new friends!

This is such a heartwarming story and really reminds you that a few kind words can go such a long way for someone who needs them!

Share this inspiring story with your friends and family.