Mom-of-4 sleeps in car while caring for dying husband, has life turned around with gift of $10,000 and new car

Sometimes people are going through their toughest times but make sure to give you a smile.

Jessica Reboredo was taking care of her four young children while also dealing with a terminally ill husband and a job. But she made sure to always give her customers a big smile. Her kindness was then returned tenfold as a result.

Jessica and Robert Reboredo fell in love incredibly quickly after they were introduced to one another by mutual friends. Soon after meeting one another the couple tied the knot and started a family.

The young couple lived a simple yet fulfilling life. Robert worked as a wood craftsman while Jessica was a waitress at a Chili’s restaurant in Las Vegas. They worked day and night to earn enough money to take care of their four children, who were all under six years old.

Their happy home life was got upturned when at just 25 years old, Roberto was diagnosed with testicular cancer that had also spread to his lungs. The cancer had spread so rapidly that medical professionals advised having Roberto admitted to a hospital right away.

He was admitted to a hospital in Los Angeles which was a few hours away. Suddenly Jessica had to juggle her job, taking care of her children, and going to see her husband in another city. She was stretched thin and her budget was stretched even thinner.

She was on such a tight budget that at times she would sleep in her car when she visit Los Angeles to be with her husband. But even with all of her struggles, she had a smile on her face and wanted to make sure she put on a brave front for her family.

Because of her sunny attitude, in her life, she had made a lot of friends who cared for her deeply. One of these people was her second-grade teacher Kimberly. She and her teacher kept a close bond with one another over the years.

Kimberly said of her longstanding bond with Jessica, “she [Jessica] was sweet and kind I always wanted to have a daughter. We’ve stayed in contact ever since then.”

Her teacher also knew that Jessica held out hope that Robert would get better and return to his family.

So one day, on her usual shift at Chili’s, Jessica began to witness what she probably thought of as a miracle. A customer left her a tip for $200, the next customer left a tip for $300, and a third one left one for $500. She was overwhelmed by kindness when a fourth customer inquired about her last tip. She told him it had been $500 and he gave her a tip of $500. She said to the generous customers, “You guys have no idea how much this means to me. My husband is actually in the hospital. I almost lost him a week ago.”

Jessica was floored. But this was just the beginning of her good luck. The FOX 5 Surprise Squad walked in, after which Monica Jackson came over to say hello to the shocked young woman.

Jessica was in utter disbelief as she was bestowed with various gifts. This included a check for $10,000, a new car, and hotel reservations for Los Angeles for whenever she visited her husband. 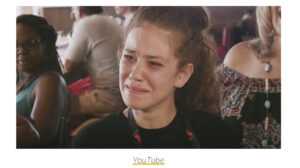 It turned out that Kimberly was the one who contacted the television station and nominated her former student. Knowing it was Kimberly who did this made Jessica even more emotional and she enveloped her former teacher in a long warm hug.

She said about the surprise, “I had no idea, I thought it was just me and my family out there trying to do this. Trying to keep all our hopes and dreams alive and trying to bring Daddy back home. My biggest thing is keep your head high and keep smiling because as long as you keep smiling, you’ll make it through.”

On August 12, 2016, Robert passed away after a long and tough battle with cancer. However, he must have been at peace knowing that there were people looking out for his wife and children.

This just goes to show you how kindness can go a long way.

Share this article to inspire people to be kind to others always. We never know what someone is struggling with.