When it was time for their little one to be born, Shaniqua Traywick and Carl Robertson were hurrying as fast as they could to the hospital on Friday, January 15. But as they drove down the interstate, it became clear to the couple that they would not make it to the hospital in time, and they decided to pull over.

Meanwhile, Indiana State Trooper Thomas Maymi was on duty on the Indiana Toll Road. As he kept an eye on the traffic near the 52 mile-marker, Maymi noticed a semitrailer pulling over on the side of the road. Out of the vehicle came Carl, who ran towards the trooper and told him his wife may be giving birth.

Wasting no time, Maymi called for an ambulance and rushed to Shaniqua’s side, as reported by ABC7. After Maymi met the pregnant wife, it was clear to him that they would not be able to get her to the hospital in time, and that the baby would have to be delivered right on the side of the toll road they were standing on. 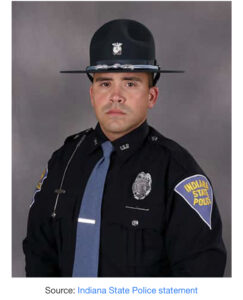 Source: Indiana State Police statement
While Maymi helped Shaniqua with her contractions, the paramedics were on their way. And once LaPorte County EMS arrived, the paramedics helped deliver a healthy baby, weighing 6 lbs., 3 o.z., according to People.

“Two minutes after paramedics were on scene, the baby was delivered. Upon delivery, mom and baby were transported to LaPorte Hospital,” the Indiana State Police said in a statement about the “special (unexpected) delivery.”

Shaniqua and Carl were quite shocked by the dramatic entry their baby had made into the world, but the small family of three is reportedly doing well. Showing their appreciation and gratitude to Trooper Thomas Maymi, the couple decided to name their baby Malaki Thomas Robertson to honor the officer who helped safely deliver their child.

“When asked, Trp. Maymi said he was glad that he was in the right place at the right time and wishes them congratulations,” the police department’s statement said. 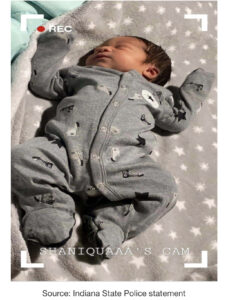 Source: Indiana State Police statement
As Shaniqua showed how thankful she was to the trooper, she also said, “We were all troopers that day!”

A similar incident took place when an officer from the Massachusetts police department responded to a 911 call while working on his shift on New Year’s Day.

The officer, Zach Hall responded to the call at around 2:45 am and arrived at the woman’s house. “It was when I saw the baby’s father running out of the house that I realized the mother was about to give birth at any moment. I just ran into the house ready to help,” Hall told People. “As a cop, you don’t really have the time to focus on nerves or emotions. We just do what we are trained to do.”

Hall quickly jumped to action and helped the woman deliver a healthy baby girl, who was named Sophia. The Agawam Police Department said the officer was “literally beaming!”

“It was good to see! It’s a nice change-a happy call instead of the usual stuff!! We’re all proud of him!” the police department added.

Extremely happy to be a part of Sophia’s birth, Hall also said, “I was there to help bring a new life brought into this world, all while trying to remain calm for the nervous parents. I feel proud and lucky that I had the opportunity to help this family and their beautiful new baby. It’s not something many police officers witness.”