When Qian Fenxiang fell pregnant with her daughter Jingzhi in 1994 it should have been a joyous occasion. She and her husband Xu Lida were a happily married couple living in China with one daughter, but in their hearts they knew they couldn’t keep their child.

China had introduced a one-child policy limit on families in 1979 which lasted until 2015. Under the draconian rule hefty fines and even forced abortions were the harsh penalties of having more than one child.

Dad Xu said they considered aborting their baby when Qian was 7 months pregnant but they could feel their baby move and if they had gone through with the abortion they would have regretted it.

With the threat of losing their home if they didn’t abort their daughter they fled 80 miles away to Suzhou and gave birth on a boat in the Suzhou canal. The couple tried to find a relative or close friend to raise their child but were unsuccessful. 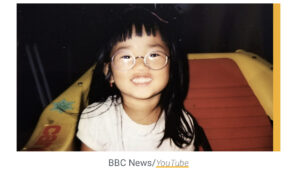 So with no other options the couple wrapped their three-day old baby in a blanket and took her in a basket to a busy market area.

She was sleeping soundly while her parents prepared her milk and after they left her alone in a busy market area, the last thing they heard was her crying, dad Xu told BBC News, trying to hold back the tears.

“[…]I held her and hugged her for a while. Then I walked to the market. […]I kissed her gently. I knew it was the final farewell. Then I walked away,” Xu said.

The couple also left a note pinned to their precious baby girl, a note to her adoptive parents. 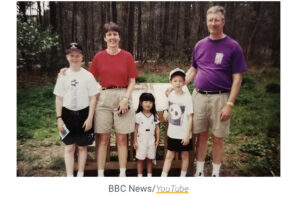 “My little girl was born in 1995, on July 24th, in the morning in Suzhou, because of poverty and other problems, we had no choice but to abandon our little girl on the streets. If you have sympathy for us parents, please let us meet on the Broken Bridge in Hangzhou in 10 or 20 years time,” dad Xu said the note read.

Their little girl Jingzhi was adopted by American couple Ken and Ruth Pohler and renamed Kati. She was then taken 7,116 miles to the couple’s home in Michigan to be raised as their own along with their two biological sons.

Adoptive mom Ruth recalls Kati asking her when she was 5 years old if she came from her tummy and Ruth was honest with her daughter.

“I said no…you came from a lady’s tummy in China but you came from heart, you were born from my heart and she was off running doing something else and she was happy with that,” an emotional Ruth said. 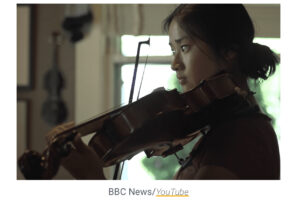 Kati was never deprived of the love and security all children deserve and her parents were always honest with her. She had access to her adoption papers but because she couldn’t read Chinese she wasn’t able to read the letter her birth parents had left with her.

Ruth and Ken did know the contents and wanted to honor Kati’s birth parents’ request. When Kati turned ten years old, Ken and Ruth sent a messenger to the Broken Bridge in China as the letter had asked. But, the messenger was too late and missed Kati’s biological parents, who had been waiting hopefully for a long time.

The messenger then spoke to news outlets about Kati’s story and it was publicized in the hope that her biological parents would come forward, and they did.

Ruth and Ken exchanged contact details with the birth parents and kept in touch. Kati’s adoptive parents filled her in on her birth and the note attached to her on the bridge. 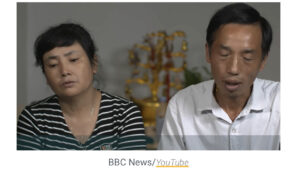 Kati was 18 years old at the time, a music and public health double major, and about to start Calvin University. She was also going to meet her birth parents for the first time.

With help from translators, Katie reunited with her biological parents on the Broken Bridge on the eve of the 2017 Qixi Festival. She also met her older sister for the first time. 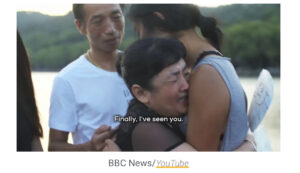 “I was definitely pretty nervous. I could tell I was doing my nervous habits, but I was also excited, and we just kept driving around because we had to time it perfectly,” recalls Kati in an article published on Calvin University’s website.

“Getting out and walking down the bridge, I just remember, saying ‘OK, you only do this once, so here we go.’” 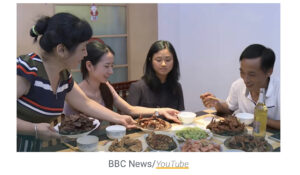 Since the meeting Kati stays in regular contact with her birthparents through text and Skype. “My dad (Xu) still texts me good morning and good night every day.”

She also planned on teaching English as a Second Language the following year in China, within driving distance of her birthparents.

“I’m definitely glad that I know, even with the complexity of it. I’ve made my birthparents so happy and that feels good … it hasn’t drastically changed my identity, but it’s definitely added a lot to it and that’s really enriching,” she said.

I can’t imagine having to give up a baby you want and love.

My heart goes out to Kati’s birth parents and her adoptive parents who did the brave act of making sure their child knew her birth story and where she came from.