Although Pauley Perrette played the role of the quirky, crime-solving forensic scientist Abby Sciuto on NCIS, she might not be that different from her character in real life.

In fact, she has many things in common with Abby, and strives to devote much of her time to helping others.

Today, Perrette has left the world of crime solving on TV – following several horrifying incidents – in order to do more comedy. We think her new look really suits her. 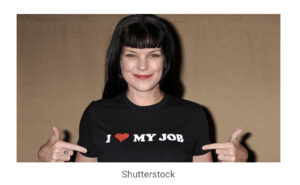 Pauley Perrette has done plenty in her life. She’s a well-educated woman who found herself landing quite abruptly in the world of comedy. Later, she became a huge star on NCIS as brilliant forensic scientist Abby Sciuto, known to millions of people all over the world.

Pauley went from being a good actress to a great one, getting all the acknowledgement that she deserved along the way. However, her 15 years on NCIS were also marred by some negative incidents – not only did she have a stalker for more than 10 years, but she was forced to exit the show in a distasteful way.

No matter what happened, though, Pauley Perrette came out a stronger person. Today, she’s back on the comedy scene, where she loves it the most.

This is her story, from a southern state upbringing to landing a big role in one of TV’s hottest shows. 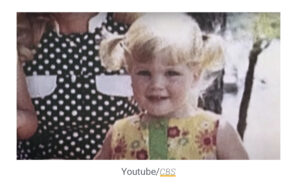 It’s tough for Pauley Perrette to say precisely where she grew up. She was born March 27, 1969 in New Orleans, Louisiana, but lived all over the south during her childhood. She spent time in North Carolina, South Carolina and Tennessee, before finally going to high school in Georgia.

Ever since she was a young kid, Perrette’s been interested in crime stories, describing herself as “completely obsessed”. When she grew up, she had dreams of being in a rock ‘n’ roll band, working with animals or becoming an FBI agent.

“I lived in Georgia at the time of the Atlanta child murders, and I was around the same age of those kids, and I lived right off the Chattahoochee River,” Pauley Perrette said of the series of murders that were committed in Atlanta between 1979 and 1981.

And her being drawn to criminals seems to be a subject that’s pretty much defined parts of Perrette’s life. 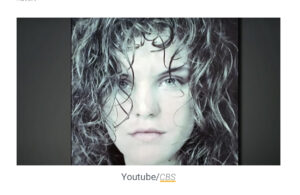 After high school, she attended the Valdosta State University in Valdosta, Georgia, later moving to New York City to continue her studies at the John Jay School of Criminal Science.

“Accidental” acting career
To be able to pay for her education, she had to work several jobs at once.

“Not only was I bartending in the club-kids scene, with a bra and combat boots and a white Mohawk,” Pauley Perrette recalled, “but I wore a sandwich board on roller skates passing out fliers for Taco Bell in the Diamond District, and I worked on one of these boats that go around Manhattan, way down in the galley, knee-deep in fish water, cooking food for the rich people upstairs.”

Pauley didn’t really pursue acting as a career, as many did in New York City. For her, it was much more of a right place, right time sort of development.

Perrette was working to be able to finish her Master’s degree, when one day, she overheard a girl saying that she made over $3,000 dollars doing a commercial. 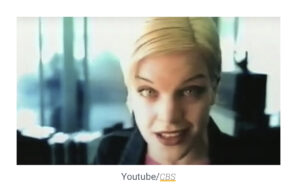 It might have been – what some would call – an “accident” that she started on the path to the top of show business. On the other hand, maybe it was fate?

“There was a director that took a liking to me and put me in a bunch of music videos and commercials. That’s how it started. In my undergrad degree, I studied Sociology, Psychology and Criminal Science. So basically, I was studying human behavior, which ironically has become an outstanding background as an actor as far as creating and understanding characters and how they think, feel and interact.”

In the early 90s, Perrette starred in several television series, including Frasier, The Drew Carey Show, and later on That’s Life. In 2000, she also got a role in the classic Almost Famous. It wasn’t long after that she’d land a role that would eclipse them all.

Pauley was cast in NCIS as quirky forensic scientist Abby Sciuto. Alongside actors such as Mark Harmon and Leroy Jethro Gibbs, she appeared in the first ever episode aired in 2003.

The show wasn’t that big of a success when it first aired. But as the seasons went by, Perrette and her colleagues on the show soon found themselves on the No. 1 drama television series in the US.

The show went on to win several ASCAP Film and Television Music Awards, as well as being nominated for three Primetime Emmy’s. 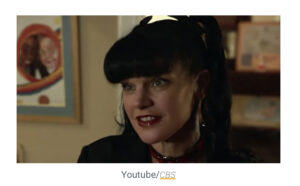 For Pauley, the show was huge. It was her first really big role, and since the role she was playing was crucial for the show, she naturally became a star. For her part, she absolutely loved the character.

Proud of her work

Speaking with Entertainment Tonight, Perrette talked about how proud she was concerning her job.

“The cast and the crew here, we love our jobs so much, and we love our show,” she told Entertainment Tonight. “We’re all like huge fans of our show. It is awesome to be at No. 1. [The show is] No. 1 scripted and around the world. That is fantastic, but what it means to us is that we get to keep doing this.”

Pauley starred in a staggering 354 episodes of NCIS. During her time on the show, she also did some other work. Actually, Abby Sciuto’s character appeared in both NCIS: Los Angeles and NCIS New Orleans, where Perrette starred in a total of four episodes.

Of course, it wasn’t all sunshine and rainbows. Though Pauley loved her job at NCIS, there were some aspects of her life that weren’t so great. 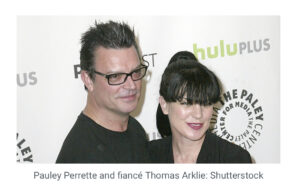 In 2000, she married Canadian musician and actor Coyote Shivens, but the couple’s relationship would become toxic. Perrette took out a restraining order against her ex-husband, only for him to show up at a restaurant in 2012 where she was having dinner with her then-fiancé Michael Bosman.

When Shivens refused to leave, she called the police.

Shivens was charged with violating the restraining order against him. If convicted, he faced 18 months in jail.

”The biggest problem we have is that the stalking laws have not been updated since the internet. That is just ridiculous because a lot of stalkers use the internet,” Pauley said.

Four years after her split with Shivens, she got engaged with cameraman Michael Bosman, only for the couple to split before a wedding. They went seperate ways in 2008. 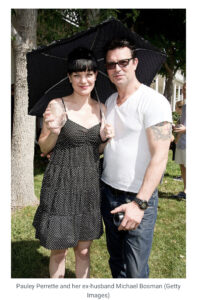 In 2011, she announced that she was dating Thomas Arklie, a former British Marine and actor. Together, the couple made a pact that they weren’t going to get married until same-sex marriage was legal.

“We have been engaged for four years because we worked for a federal, marriage-equality law, and that Friday [when same sex marriage became legal] was the strangest day,” she told Fox in 2016.

In 2019, Pauley and Arklie decided to split. The same year she wrote on her Twitter that she would live in celibate and didn’t want a man in her life. 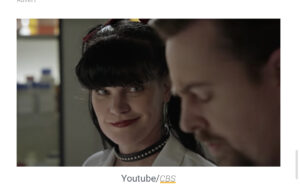 Pauley starred on NCIS for a total of 15 years, and when you work for that long a time with co-workers, arguments will surely arise. In Perrette’s case however, arguments were the least of it.

In 2017, following 15 seasons on the show, Perrette announced she was leaving NCIS. Just days after, she took to Twitter, where she implied she’d left the show due to “multiple physical assaults”.

According to several news outlet, Perrette and Harmon’s relationship had turned rather icy due to a dog bite on set.

“I hope everyone will love and enjoy EVERYTHING ABBY not only for the rest of this season but for everything she has given all of us for 16 years,” Perrette wrote . “All the love, all the laughter, all the inspiration…I love her as much as you do.”

Saying goodbye to a character she had played for over a decade wasn’t easy on Perrette. Speaking with CBS Sunday Morning, the actress said she felt down about her departure from the popular show.

“It makes me sad to imagine a world without Abby in it. It really makes me sad,” Perrette said. 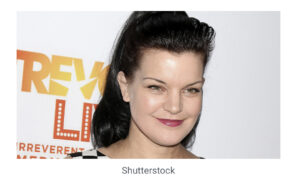 In 2019, she wrote on Twitter that she was “never going back to NCIS”, as well as that she was “terrified” of lead actor Mark Harmon.

Icy relationship with Mark Harmon
Speaking with USA Today, she declined to further discuss her tweets.

“That is a part of my past now, and it’s nothing that I have any need to talk about again, other than one thing: I’m certainly grateful for having the opportunity to play that character and I always will be,” she said.

NO I AM NOT COMING BACK! EVER! (Please stop asking?) I am terrified of Harmon and him attacking me. I have nightmares about it. I have a new show that is SAFE AND HAPPY! You’ll love it!#HappyPlace Love y’all!

At the same time, her time on the show gave her several great friends. Since last year, she’s back with the CBS Network, starring in the comedy show Broke.

“Michael Weatherly [starring as Anthony DiNozzo on NCIS] is like my brother,” Perrette said. “I love him more than anything on the planet Earth. He’s awesome. And CBS is home to me. The network and the studio has always been really, really good to me.” 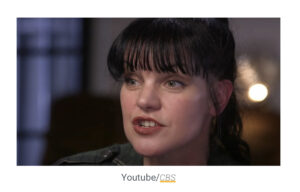 As already mentioned, Pauley is a person who cares about others, and certainly wants to give back to the people that helped her earlier in her career.

The celebrated forensic scientist studied at both Valdosta State University and John Jay College. In 2018, she shared that she’d created two scholarships to benefit female students majoring in criminal justice. She wants women to follow in Abby’s footsteps and pursue a career in both science and math.

“Abby is not just a TV character for people,” Perrette told People. “These young girls have modeled their entire lives off of her. It’s like Abby has raised a couple of generations of young girls and has inspired this international phenomenon of young women going into math and science and STEM programs because she made it accessible, cool, attainable and fun.” 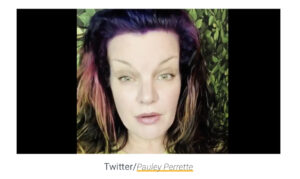 So what is Pauley Perrette up to now? Well, she was back in television comedy with Broke, but that show was labeled as a “limited series” and the last episode aired in May. Still, she looks absolutely stunning!

Perrette has plenty of experience of working with comedy, having featured in both Frasier and The Drew Carey Show. For her, it was the perfect time to do a comedy show once again.

“It’s such a weird time for everybody,” she told USA Today. “I was already so excited about people seeing our show because it’s my favorite show I’ve ever done, so funny, sweet and awesome. But now I’m really excited in a whole other way. I feel people need this right now. It really makes people happy, When we’re in times like these, when your job is specifically to bring people joy, that’s a great job.”

Pauley’s been through a lot during the last decade. But it’s safe to say NCIS changed everything for the better.

“This show restored my faith in people, in this industry. SO GRATEFUL I worked with this cast & crew,” she wrote on Twitter. “Best people I’ve EVER worked with. Healed me. Changed me. Made me whole. So Blessed.” 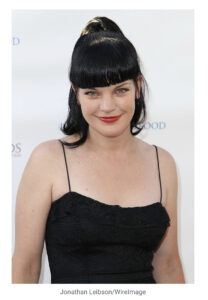 Pauley is a wonderful acress who’s also dedicated to helping other people in the best ways she can. We wish her all the best in the future, and hopefully we’ll see her on primetime soon again.