Tattoos and piercings have been popular for many years. Some decide they want to honor their late family member, friend, or pet with a tattoo, while others see it as art and a nice piece to have on the body. However, no one comes close to Anthony Loffredo when altering the body with some tattoos and piercings.

The 33-year-old French man has altered his body in many ways, including cropped ears, a split tongue, subdermal implants on his forehead, and a blackened face.

Anthony Loffredo is called “Black Alien,” whose transformation is out of this world. 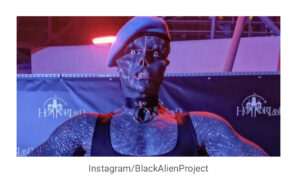 The human body is fascinating. Just the fact that the body itself can heal a wound is like something taken straight out of a magic book – and when looking into it, we live with a machine inside of us.

Just look at these facts, as reported by National Geographic.

Our brain is more active when we’re asleep than awake; our body gives off a tiny amount of light that’s too weak for the eye to see, information zooms along nerves at about 248 mph, and scientists estimate that the nose can recognize about a trillion different scents.

There are many things with the human body that is too cool or complex to understand, and that also goes with our appearance. Just the fact that evolution has given us tools of, for example, five fingers and five toes on each hand and foot is amazing, perfectly calculated in the science of biology.¨

However, even though our bodies seem to have adopted incredibly well regarding evolution, some people want to take it a step further.

Many people have decided that they want to modify their bodies in numerous different ways. But now, a new person is getting a lot of attention online. His name is Anthony Loffredo, or more famously known as “Black Alien.”

Today after more than a decade of body modifications, he looks more like a non-human than a human. So what got him started? Here’s all you need to know about him – and his most bizarre modification he went through just weeks ago. 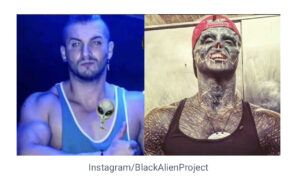 Anthony Loffredo has turned people’s heads for more than a decade with his body modifications. As a young kid, he was very fascinated with the human body and the different ways it could be “molded.”

Who is Black Alien?

“Since I was little, I have been passionate about the mutations and transformations of the human body,” he told the French media outlet Midilibre.

Anthony’s younger brother, Andy, recalls when “Black Alien” found his passion. As a teenager, he was mostly into bodybuilding, practicing the basics. Bodybuilding was the way Anthony got into body modification from the start.

For him, bodybuilding was a way of modifying the body, seeing people grow more and more muscles.

“From the age of 10, he used the internet to watch bodybuilders’ bodies “transform,” Anthony recalled.

In his 20s, Anthony Loffredo was working as a security guard. However, something wasn’t quite right. Anthony felt like he wasn’t living the life he wanted to live, and instead, he decided to change career paths.

“I stopped everything at 24 and left for Australia. It has become normal, even unconscious, to constantly think about my plans [for the body modification] for the next few months,” he said, adding that he loves to get into the shoes of a “scary character.”

“I often settle down somewhere and play a role, especially at night in the dark streets. I explore the contrast between the role I play and myself.”

Black Alien – body modifications
As Loffredo returned to France after a stint in Australia, he decided to “sculpture” his body. Over four years, he went through with his major transition and body modification. However, he explains that he could have done a lot more.

Loffredo says his modification into “Black Alien” is the project of a lifetime. And today, he is turning heads with what he’s done.

Let’s take a look at what he’s done in just four years.

As of now, Black Alien has had his body tattooed in black lines, face tattooed, which has made his face black, split his tongue like a lizard, and done a unique tattoo that made his eyes black.

But it isn’t just tattoos. Loffredo has also undergone special surgeries, putting in dermal implants in his head to get a reptilian-like shape. In addition, he has had his ears surgically removed, dermal piercings on his nose, brow, and chin, and has had portions of his cheeks sliced out, making them look like pink lightning bolts.

Since removing the nose was illegal in his native country of France, Loffredo had to travel to Spain to get it done.

“Thank you to you, @oscarmarquezbodymod you will have marked my life. Now I can walk with my head high, thanks to you. I am proud of what we did together,” he wrote on Instagram after his drastic nose job. 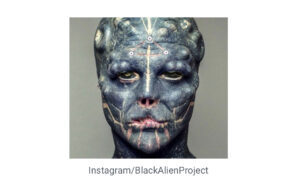 Earlier this year, he also had his upper lip removed, and now, Black Alien announced that he’s gone through with the next face in his transformation.

Shows off new “alien claw”
So far, he’s only achieved 34 percent of his desired transformation, he claims.

Loffredo’s documenting his journey on Instagram, calling it the Black Alien Project. As of today, he’s got more than 850,000 followers. And his fans are stunned about the great lengths he’s willing to go.

In the future, Loffredo dreams of getting his skin removed to replace it with metal. Further, he wants to modify his arms, legs, fingers, and the back of his head. And now, he’s taken the first step.

Weeks ago, Black Alien shared pictures of his latest modification, showing an “alien claw” with two of his fingers removed. At the same time, as many of his followers praise him for being bold, others question his motive.

Some would surely be scared of meeting Loffredo in the streets. However, despite his unique looks, he claims that he has no problem attracting members of the opposite sex.

Even though this is a very extreme body modification, Loffredo has the support of his family. On the UK Mother’s Day, Black Alien posted a picture of him with his mother, with the post getting thousands of likes.

“Mum tells them it’s not true – she doesn’t have nightmares when she looks at me,” he wrote in the caption. “I manage to put a smile on your face, and that for me is one of my best victories. A mother never judges her son.”

Future plans
Black Alien dreamed of leaving the French city Montpellier and instead exploring other countries across Europe. The goal? To see how people in different countries view him and react to his alien looks. He also wants to video their reactions and work with tattooing eyeballs.

He is not regretting one single modification he’s done.

“My only regret would be that I didn’t do it,” he said.

As mentioned, Loffredo can’t go through with all of the surgeries in France since it is illegal. So, he decided to move to the Spanish city of Barcelona, a city he truly loves.

“There are people of all ancestry here, and I like it,” he said, adding that he always gets curious looks from people passing by.

As of September, Loffredo revealed that he is about one-third complete with the “Black Alien Project.” We don’t know what his next step will be. But one thing is for sure; Anthony Loffredo will continue to stun the world with his looks – and it will be fascinating to see what he will look like when he’s all done.

What do you think of Anthony “Black Alien” Loffredo? Do you believe this is taking it too far, or should this type of body modification be seen as something natural? Please, share your thoughts in the comment section.