It hasn’t been a long time since Richard Gere, 72, became a dad again.

In February 2019, Richard and his wife, 39-year-old Alejandra Silva, welcomed a little boy to the world. And in April 2020, the birth of their second son was reported.

While the babies represent the first kids Gere and Silva have had together, both have children from previous relationships.

In Gere’s case, that means his 22-year-old son, Homer James Jigme, who he co-parents with ex-wife Care Lowell. 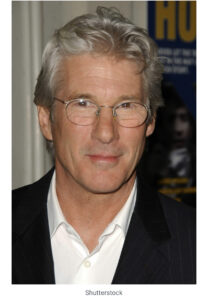 Admit it … you’re curious to see how this 22-year-old looks today. Well, fortunately, we have the answer – and you won’t be disappointed.

Richard Gere cemented his role as Hollywood heartthrob following his part in American Gigolo and iconic movies such as Pretty Woman and An Officer and a Gentleman.

Shortly thereafter Richard met his first wife, model and actress Cindy Crawford. According to media reports, the couple met at a BBQ.

Soon the couple was one of Hollywood’s hottest and wherever they went, they were followed by the paparazzi.

Gere and Crawford appeared on red carpets and front covers, and went to dinner at the best restaurants in New York and Los Angeles. Gere, however, doubted whether he would marry his younger love.

But in December 1991, the couple decided to take the jet and get married in Las Vegas. It was far from an extravagant wedding – only a few guests were invited to the chapel. 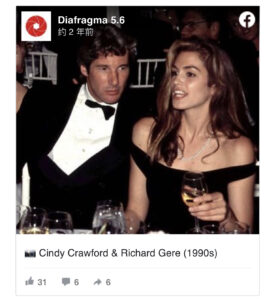 “It was the wedding I dreamed of. It was so last minute,” Crawford once said about the nuptials.

Four years later the couple divorced. Cindy Crawford has always maintained that the age difference was too great.

“I think I was more willing at 22 to be, like, ‘Okay, I’ll follow,’ but then you start going, ‘Well, I don’t want to just follow — I want to lead sometimes and I want to walk side by side sometimes,’” she admitted. 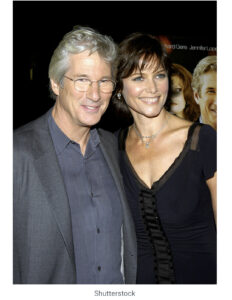 In February 2000 they welcomed their first and only child, Homer Gere.

During his relationship with Crawford, Gere had been reluctant to have children. With Carey Lowell, everything was different.

“It was actually quite simple. I never had an issue about children one way or the other. With Carey, she had a child from a previous marriage, and it was just a natural thing, caring for this child, having our own child. It was totally spontaneous and right,” he told The Guardian in 2002. 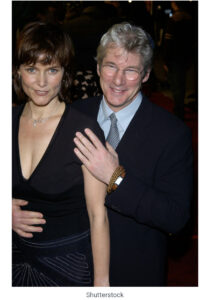 Homer was born in New York City and his parents named him after their respective fathers, and gave the Tibetan name Jigme, dud to Gere’s commitment to human rights in Tibet.

When the Pretty Woman actor talked about how fatherhood can change a man, he told The Guardian:

“The marginal stuff just doesn’t affect you any more when you weigh it against the real things in your life. All the cliches [about parenthood] are true. “

Homer ended up in the limelight quite early, as his parents were world-famous celebrities. 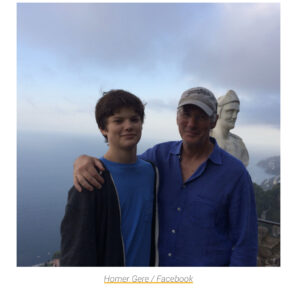 When his mother and father went their different ways in 2003, much was written about the family’s privacy.

At times, there was much speculation and cheap shots thrown in connection with the divorce. Homer was once again placed in the limelight because his parents were arguing about who would get custody of him. 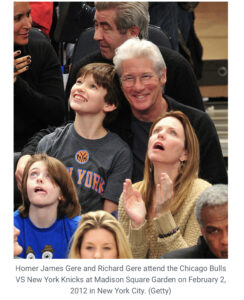 According to media reports, Carey Lowell imposed the tough demands because she gave up working during several years. Lowell claimed that she gave up her career for Gere and for their son Homer, and that she is therefore was entitled to half his income since they got married in 2002.

Unlike his father, Homer likes to maintain a low profile. He currently lives in New York.

From the looks of things, Richard has passed on his infectious charm and handsome looks to his son.

But, unlike his father, Homer likes to maintain a low profile. That said, even though he usually tries to stay out of the spotlight, Homer made several public appearances with both his parents during his childhood days.

For example, Homer has been seen alongside his father at the largest children’s film festival in Europe, ‘Giffoni Film Festival,’ at Giffoni Valle Piana in Italy. According to reports, Homer is still very close to his dad and many people believe there is a striking resemblance between the two. 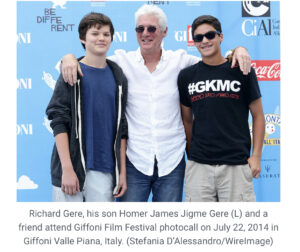