He made us laugh with his acting and we fell in love with his humor. Robin Williams had become famous as an actor but what he was truly admired for was his humility. Everyone in his presence felt it, and a sign that this was true even for animals was seen when he first met Koko, the gorilla.

Koko had become quite popular for learning a version of the American Sign Language (ASL) and being able to communicate with her handlers that very few apes had managed to before. In 2001, Robin Williams was invited to meet and interact with her. And they hit it off almost instantly.

The clip starts with Williams talking about his interaction with the gorilla. “I recently had a mind-altering experience communicating with a gorilla. Her name is Koko.”

At the time of the meeting, Koko was mourning the death of her childhood playmate, Michael the gorilla, who had died six months earlier. She reportedly hadn’t been keeping well, until the meeting with Williams.

In the video, Robin Williams is sitting in a chair, waiting for Koko to come in. When the gorilla is brought into the room, she sits next to him on the floor and grabs his hand. The actor gingerly gets up from his seat and sits next to her. The two are seen sharing laughter and observing each other with curiosity.

“Notice that Robin made Koko smile — something she hadn’t done for over six months, ever since her childhood gorilla companion, Michael, passed away at the age of 27,” said Koko’s caregiver, Francine Patterson, as reported by Today.

It was quite evident that the actor instantly made the gorilla feel comfortable. Koko even grabs the actor’s glasses and tries them on. At one point, the gorilla went through his pockets and rifled through his wallet.

“Robin’s ability to just ‘hang out’ with Koko, a gorilla, and in minutes become one of her closest friends, was extraordinary and unforgettable,” Patterson wrote. “But not only did Robin cheer up Koko, the effect was mutual, and Robin seemed transformed.”

The interaction between the two is heartwarming to watch. And the actor felt the same. “We shared something extraordinary – laughter. Koko understands spoken English and uses over a 1,000 to share her feelings and thoughts about daily events, life, love, even death,” he had said.

When Koko was told of Robin Williams’ death in 2014, she reportedly signed, “cry.”

Born at the San Franciso zoo, Koko lived most of her life in the Santa Cruz mountains, under the care of The Gorilla Foundation in Woodside, California.

Since Koko was born in a zoo, she was raised and cared for by humans, Francine Patterson, Koko’s caregiver, said that she had a vocabulary of about 1,000 words of the Gorilla Sign Language, a modified version of ASL. 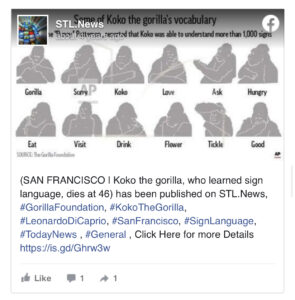 In addition to this, she also understood about 2,000 words of spoken English. According to Patterson, who was also her instructor, she might have been an ape, but Koko’s intelligence was the same as a 3-year-old human child.

Koko was extraordinary for more reasons than one. The ape was known to show signs of empathy for fellow animals, loved a good argument, and also engaged in banter and insults! “Through mastery of sign language—the familiar hand speech of the deaf—Koko has made us, her human companions, aware not only that her breed is bright, but also that it shares sensitivities commonly held to be the prerogative of people,” Patterson said.

She had gained widespread attention when National Geographic published a photo of Koko taking a photograph of herself in the mirror on the cover of their 1978 magazine.

Koko was also one of the few apes known to keep a pet. Back in the 80s, Koko had picked a gray kitten and decided to name her All-ball. “The cat was a Manx and looked like a ball,” said Ron Cohn, a biologist with the foundation. “Koko likes to rhyme words in sign language.”

According to cheatsheeet, Koko raised All-ball like her own and spent an hour or so playing with each other every day. But that was not all. She also used the cat as a scapegoat when she ripped the sink off the wall. A Popular Science article on Koko states, “Koko also used the kitten as a scapegoat when she was being bad; one time, Koko ripped a steel sink from a wall, pointed at All Ball, and signed “cat did it.”

The image of Koko cradling the little kitten is one of the most striking images that shows a relationship between two animals.