While most of us can enjoy working or doing our school work from home on a snowy day we should spare a thought for those workers who have no choice but to go out into the cold and navigate the treacherous roads.

Snowplow drivers are the heroes of winter making sure the roads are as safe as possible through the cold winter months, without them our towns and cities would grind to a halt when it snowed.

These winter warriors not only have to go out on the coldest of mornings but often have to work in the dark to ensure the roads are clear before most of us are even awake.

One snowplow driver became a hero, not just for his work keeping the roads of West Bend, Wisconsin clear of snow, but also for saving a 5-year-old boy. 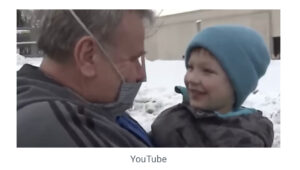 A year ago this month David Gehrke was out clearing the streets at 4 a.m. when he spotted something moving at the side of the road. Luckily his truck is well lit and as he got closer he was able to make out the moving figure.

“It was snowing, blowing and miserable,” David told WISN News.

“I realized that was not a dog or a deer, that was a small little boy just dressed in a pair of zip-up onesie pajamas,” David added. “The light on the side of my truck illuminated him. At 4 a.m., what is he doing out here?”

Five-year-old Maddox Pierce thought he was home alone and had wandered out of his house in the middle of a freezing cold winter night. 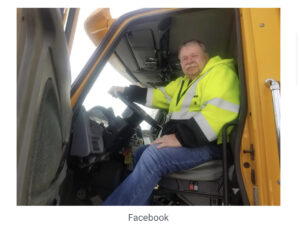 The youngster wasn’t wearing a jacket, a hat or even shoes. He could have easily frozen to death.

David stopped at the side of the road and scooped the little boy up.

“I immediately took my jacket off and wrapped it around him and put him in the truck,” he said. “I called police dispatch. I got the heat blasting in the truck. I’ll keep him warm until we get help on the way.”

When officers arrived they took the boy straight home. Maddox told police that he woke up in the middle of the night and thought he was alone so decided to walk to his grandfather’s house. 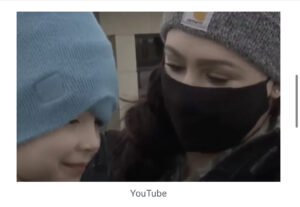 Maddox wasn’t alone, his mom Brittany Weissenburger was working at the time and his 14-year-old aunt was at the house babysitting, but asleep when Maddox got up as it was so early in the morning.

“I’ve been a mess since everything happened,” mom Brittany said. “He’s never ever done anything like that before.”

Brittany said she had bought cameras and alarms to make sure this never happens again.

“I’m so thankful. Like, what are the odds he would find him at that exact moment, that he pretty much came outside,” said a very grateful Brittany. “He just exited our townhouse, walked down the road a little bit and he was found.”

David is just glad he was in the right place at the right time and managed to spot the youngster.

“We see strange things, but this was a life-threatening situation,” he said.

Police gave David a certificate of appreciation, but he said “the biggest reward I got is when I handed that child to the police officer to know that child is safe.”

Thank goodness David spotted little Maddox when he did, I dread to think how long he would have lasted in freezing cold temperatures with hardly any clothes on.