Struggling woman gets couch for free and finds over $36,000 hidden inside, returns every last dollar

Sometimes life throws us curveballs that we do not know what to make of. But these instances are when our character is truly tested.

Southern California’s Vicky Umodu recently experienced an incident that not only proved just how good of a person she is and also was rewarded for it!

Vicky Umodu was in search of furniture to furnish her bare new house with. She went to Craigslist to search for furniture and started looking at things people were giving away for free.

“I scrolled down and saw free items,” she said. “So, I clicked on it, and the first thing I came up with was this family that wanted to give a sofa, and everything in their bedroom set…I said maybe it’s a gimmick, so I called them.”

She learned that the ad was real. The person who posted the ad was in the process of liquidating property owned by a loved one after their death and thus wanted to find a new home for the furniture.

Umodu was incredibly happy with her luck of being able to get such great furniture for free. Later on, when she was closely examining her new sofa she noticed something out of the ordinary. 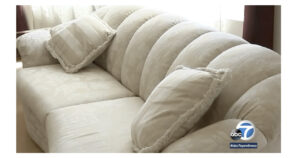 She saw an item she could not identify in one of the sofa cushions. At first, she assumed it might be a heating pad but when she saw no cords coming out of the sofa, she discounted that theory.

She finally decided to open up the cushion to see what it was.

Inside she discovered several envelopes of varying sizes and colors. And inside those envelopes were thousands of dollars in cash.

“I was just telling my son, come, come, come! I was screaming, this is money! I need to call the guy,” said Umodu.

When she called to tell the family what she had found, they told her they had found money hidden throughout the deceased man’s house. But that was only a few hundred dollars here and there, nothing compared to what Umodu had discovered. The family was unsure why the deceased man might have hidden cash in his couch.

When it came to doing the right thing, Umodu did not even hesitate once and knew she would return the money to the family. She expected nothing in return.

But the kind family gave Umodu $2,200 so she could buy herself a new fridge. This was their way of saying thank you to her.

“I was not expecting a dime from him, I was not,” Umodu said. She said she never for a second even thought about keeping the money for herself. “God has been kind to me and my children, they’re all alive and well, I have three beautiful grandchildren, so what can I ever ask from God?” she said.

Such a heartwarming story! This is a great reminder of good things happening to you when you have the right intentions.

Share Vicky Umodu’s story with your friends and family to inspire them to be kind as well!