Heroes come in all shapes and sizes. In this day and age, where prejudice is rife and one look at news headlines is enough to make you believe that the world is in an irreversible downward spiral of despair, that’s important to remember.

We here at Newsner are tired of checking news feeds every day, only to see that there’s a strong focus lent to the constant pumping out of negativity. The fact of the matter is that where there is evil there is also good, and where there are detestable acts of violence there are also acts of heroism.

One family knows that better than most, after their two teenage sons leapt into action to save the driver of a truck involved in a fiery crash over Easter weekend. 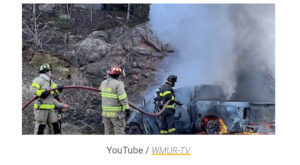 According to reports, Melissa Heck was driving with her teenage sons along Route 9 in Nelson, New Hampshire in the early hours of April 15. They were on their way to visit family in New Jersey and Maryland, but could not have anticipated the turn of events that would take place.

Speaking to the Sentinel Source, Melissa explained how she first saw sparks flying from the undercarriage of a truck in the oncoming lane. Then, suddenly, the truck swerved and smashed into the rock wall bordering the road.

To make matters worse, the wreckage then began to billow smoke, and the truck’s driver was trapped. 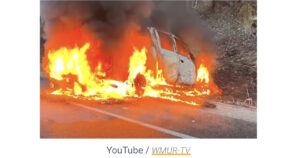 It was then that Melissa’s 19-year-old son, Vincent, yelled at her to pull over. He and his younger 16-year-old brother, Jake, left the safety of their vehicle and ran over to the truck.

“I immediately told my mom to pull over, and before she even stopped the vehicle, I jumped right out and ran over,” Vincent explained to WMUR-TV.

With her sons racing to save the truck driver, Melissa called 911. Vincent, meanwhile, found the driver to be unconscious, and so broke the driver’s door off the truck and pulled the man from the wreckage while Jake searched the vehicle for other passengers.

Once they’d pulled the driver away from the truck – which was on fire by this point – Vincent and Jake performed CPR on the man and tended to his wounds.

“The vehicle literally — not 10 seconds after I pulled him out — went up [in flames],” Vincent told the Sentinel Source.

Jake added: “My main focus was just making sure he was OK. I didn’t really have any other thoughts.”

The driver of the truck was later identified as Jeffrey Voss, 50. He was taken to the Cheshire Medial Center, where his injuries were deemed non-life-threatening and he was able to make a full recovery.

According to the authorities, Voss had fallen asleep at the wheel and appeared not to be wearing a seatbelt at the time of the accident.

“By the time I got there, the vehicle was fully engulfed, and if that individual was still in there, that individual would never have survived the incident,” Nelson Fire Chief Joseph Sarcione said, according to WMUR-TV.

Captain Chris Staples, with the Keene Fire Department, concurred that Voss would have “hands-down” died were it not for the brave actions of brothers Vincent and Jake.

“The fact that these people stopped and actually agreed to help, clearly putting their lives at risk to do that … that’s pretty profound,” Staples said.

Speaking to WMUR-TV, Jake hailed his brother as the real hero.

“If it wasn’t for my brother getting him out of that car, he would not have survived. I was not fast enough to get to the guy.”

Vincent, though, played down his actions, insisting he didn’t do anything more than anyone else would in his position.

“I just think I was doing what any normal human being should do,” Vincent responded. “I just hope somebody would do the same for me.”

Proud mom Melissa, meanwhile, was full of praise for her sons.

“I was just really proud of my boys for being able to do that,” she said.

“[T]o work together, and they rose to that challenge.”

Wow! Thank God Vincent and Jake were exactly where they needed to be at the time of the accident. I’m sure Jeffrey Voss and his loved ones are extremely appreciative.