When Josie Bowers was just 15 years old she experienced something very frightening. She was on vacation with her family and staying at a Hilton hotel in Ocean City, Maryland, when she heard a noise at the door.

The then young teen was on her own in the hotel room and was just about to get into the shower when she was startled by the noise.

What she did next saved her from a potentially dangerous situation and now four years later she has shared the useful tip with her followers on TikTok. 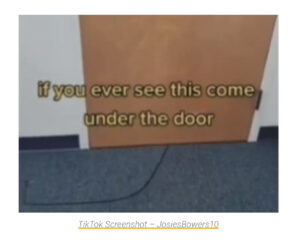 “Before I could shower I heard these noises, I went to go see what it was and it was this contraption. I was just standing there in my towel and this man opened the door,” the now 19-year-old Josie shared in one of her TikTok videos.

“My main thought was holy s*** I’m in a towel right now and someone is about to break in and get me. So the door opens a crack, and I just slammed it back shut and put the deadbolt on.”

Josie then shared a tip she learned from her police officer stepdad which helped to keep her safe that day.

After Josie slammed the door shut the two men outside her hotel room started to talk to her, claiming they were employed by the hotel and were there to fix her broken door. 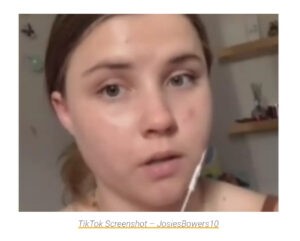 “So they tell me ‘your keycard is broken and we need to get into the room and fix your keypad for you,’” Josie continued. “And so I open the door a tad bit, to see if it was a worker. It clearly wasn’t, they were in jeans and a T-shirt. Hilton keeps it pretty classy, not the attire.”

Josie then remembered a tip she got from her police officer stepfather – don’t ever let people know you’re alone.

With the two men trying to convince her they were there to fix the door, Josie’s response led them to believe she was not the only one in the room.

“I yelled ‘Hey dad, there’s someone here to fix the door.’ As soon as they thought that I wasn’t alone – and potentially my dad was there – they ran, they were gone.” 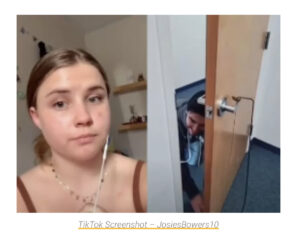 Josie had avoided a dangerous situation and is thankfully sharing it in a TikTok video which has since gone viral.

“I’m glad I had this experience so I can teach people about it. Obviously, I’m safe but it could have ended up a lot worse,” she said. “Be safe, you can get door stoppers, always put on the deadbolt.”

Josie’s video has been viewed by more than 12 million people and will likely protect others should they get into scary situations such as this.

Her quick-thinking actions and remembering her stepdad’s sound advice protected her from these two men. I dread to think what their intentions were.

Please share so more people know about this useful tip.