Kathleen Turner rose to fame in the 1980s with her strength and attractiveness – many consider her one of the most beautiful actresses in Hollywood.

It is this fortitude that has helped her through the many goods and bad times the actress has experienced over the years.

Kathleen Turner had a rough childhood and was raised in a family with four children. She and her siblings grew up in London and Venezuela. Tragedy befell her at a young age when her father unexpectedly passed away while mowing the lawn of their Hampstead home.

A month after his death, Kathleen and her family were kicked out of the UK by the foreign service. Turner and her family settled in Springfield, Missouri, all still grieving their father and former home.

As an adult, Tuner finally found peace after moving to New York to pursue an acting career. She had some luck on the stage – but her biggest break came when she was given the role of the femme fatale in 1981’s “Body Heat.” 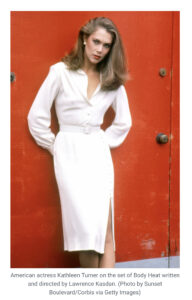 Three years after starring next to William Hurt, Turner was given a chance to co-star with Michael Douglas in the famous “Romancing the Stone.” Douglas was in a rocky separation from his wife Diandra at the time of filming, and he and Turner developed some feelings for each other.

“We were in the process of falling in love – fervent, longing looks and heavy flirtation. Then Diandra came down and reminded me he was still married,” Kathleen said.

She eventually married the property developer from the film, Jay Weiss, in 1984. The two had their only daughter together soon after. Rachel Ann Weiss was born on October 14, 1987.

Unfortunately, the couple’s relationship began to fracture as they started raising their daughter.

“I’d make the movie companies give me long weekends or provide extra tickets so my daughter and husband could come to me. But there was a sense in the marriage the effort was all on his side, which made me feel guilty. It was one of the reasons it ended. I started to feel very oppressed. I thought, ‘Hang on a minute, you’ve done very well out of being married to me also,’” Kathleen explained.

In 2005, Turner starred as Martha in the Broadway revival of “Who’s Afraid of Virginia Woolf?” and it was then that their marital problems came to a head. Turner became incredibly busy while acting in eight shows a week, and it appeared that Weiss wanted no time with her when she was home.

The two divorced amicably during that time, and Turner earned a Tony award nod for her time as Martha.

The star had also earned an Oscar nomination back in 1987 for her role in “Peggy Sue Got Married.” Her film career was alive and well during the 80’s, and she starred in a variety of blockbusters–three of which were with Michael Douglas.

However, in the 90’s, Kathleen experienced a medical setback when her neck locked, not allowing her to turn her head. In addition, her hands swelled to the point where she stopped being able to use them.

“It was crippling,” Kathleen said. “You stop taking things for granted when you lose them, even temporarily. What I took for granted – my athleticism, my ability to throw myself around, and just be able to move however I wanted to. When I lost that, that was a real crisis of self: who am I if I cannot do this?”

The culprit of her misfortune wound up being rheumatoid arthritis, a condition characterized by the swelling of the lining in our joints. This condition causes chronic pain that can be difficult to manage. 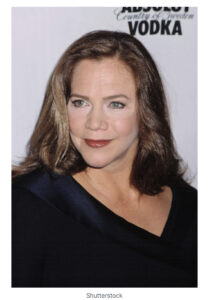 “When it was first diagnosed, I was terrified because they said I’d be in a wheelchair,” Kathleen explained. “I thought, ‘If I can’t move, I can’t act.’ Acting isn’t just what I want to do. I was born to do it. It’s at every point of my living. The idea of not being able to do it was the most frightening part – that and the constant pain.”

Kathleen turned to pills and alcohol to manage her pain. While these helped her to work, the habit of drinking vodka led to her passing out during rehearsals for shows like 2002’s stage production of “The Graduate.”

The actress actually went to rehab after the show stopped running, only to find out that she was not an alcoholic. Instead, she was told she simply needed to better track when she was taking her medications and their side effects. 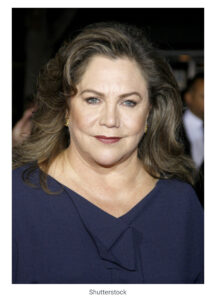 Today, the actress does yoga and pilates to help manage the pain and remain nimble.

While better managing her pain, the star really began to focus on her stage career. While she did still occasionally work in film and television, she returned largely to her roots as she got older, even starring in “Cat on a Hot Tin Roof” on stage in her forties.

“Because I knew that the better roles as I got older would be in theatre, which is absolutely true, so that was a little foresight on my part of which I am justly proud,” Kathleen said.s 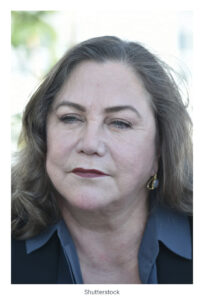 Focusing on theatre has also allowed the star the time to focus on her passions of hers, such as volunteering at Amnesty International and working for Planned Parenthood of America.

A staunch feminist for most of her life, Turner has turned her doubtless strength to uplifting other women throughout her life. Her ideologies are represented clearly in Gloria Feldt’s 2008 memoir of the star, Send Yourself Roses.

“We are the first generation of women who are financially independent. Women are going back to work,” Kathleen said. “They’re reinventing themselves. I thought I could support that, even increase that. So it has got a lot of philosophy in it and a lot of my beliefs.” 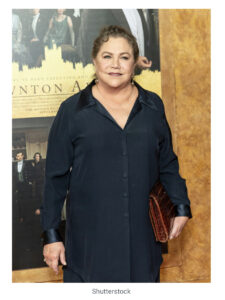 What do you think of Kathleen Turner’s challenging but rewarding path? Let us know in the comments!