Taking on the role of a step-parent isn’t always easy. But for this woman things seem particularly difficult every time her boyfriend’s 6-year-old comes around. Apparently, the entire household changes for the worse whenever the little girl is there, according to the woman, who isn’t sure how long she can keep up with the child’s constant need for attention or tolerate her temper tantrums. Thus, she turned to Slate’s Care and Feeding advice column for help.

In the letter, she explained that she began dating a man in 2018 and moved in together in 2019. “Her mom and dad have been separated since she was 2.5 years old (3.5 years ago),” she noted, adding that whenever, her boyfriend’s daughter comes over they “try to keep our normal routines, schedules, and treat everyone in the home equally and respectfully.” 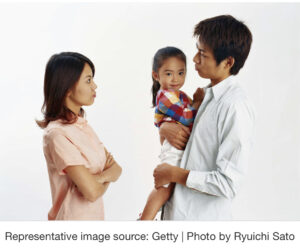 “However,” she explains, “when she is with her mom, the world stops. Every available waking moment is invested in the little girl. She has constant activities, adventures, and stimulation, plus undivided attention from her mom and grandmother. So she feels entitled to the same when she’s with us.” Despite this, the couple have tried to give her some play space. “She has a basement playroom and a tent, toys, and books in her room,” she shared.

Of course, they play with her “when we can, but we also value adult time, privacy, and structure.” Sharing an instance, she says that when the little girl brings her toys in the living room, all she and her boyfriend can do is “watch her play or watch her watch kid’s programs.” She added, “It’s the only time she is not hanging off someone’s leg or neck, wanting to play.”

“Whenever we leave the room she follows us around. She constantly interrupts conversations, does not say please and thank you, and the more attention we give her, the more she demands,” expressed the frustrated writer. The boyfriend has had a tough time setting boundaries as he feels guilty about raising her without being married to her mom. “[He] doesn’t want to spend all his time with his daughter fighting, punishing, and saying no. He’s scared she won’t want to come here anymore,” explained the woman who feels that things are only going to get worse going forward.

“She has told my boyfriend and me straight up that she likes when he and I aren’t getting along because she gets whatever she wants from her dad. She is excessively rude to me, screams at me, hits me, can never do anything I ask of her, and doesn’t listen,” revealed the poster. Even when she tried to speak to her in order to understand if the child is hurt, “she says no, and that she’s just acting out because she wants to. It is exhausting, and honestly, she is not enjoyable to be around.”

Being a single mother herself, the OP understands how difficult it is to manage this behavior and thus suggested counseling but both her boyfriend and the girl’s mother didn’t want that. “I love the child dearly and try to teach her things that I know my boyfriend and I value, but more and more, I just don’t want to be around her every other week. I don’t want ‘our’ lives to grind to a halt every time she is home. I love him and his daughter very much but don’t feel I have any control of my life anymore,” she explained.

While some commenters believed that something was wrong with the OP’s attitude, others felt that her boyfriend’s daughter was being a brat. “You don’t love your stepkid and you don’t want to be a stepparent. Own up to both and take it from there,” wrote one. “DUMP HIM. He is not going to change, neither is the ex or Grandma. Let them deal with the fallout of the spoiled brat they are raising,” shared another.