It’s often the young and beautiful who portray the love stories, whether it’s on the big screen, the pages of a romance novel, or online where we can all obsess over the latest celebrity matches.

But one elderly couple became a woman’s inspiration for showing the true meaning of love and romance.

Emily Hime recounted the last few months of her grandmother’s life which was both a heartbreaking time, but also a time when she said she was “blessed to witness something beautiful” – the unconditional love between her grandparents.

Emily told Love What Matters that her family had always teased her grandfather saying that he would never survive without grandma as she did everything for him but in the last few months of her life the roles were reversed. 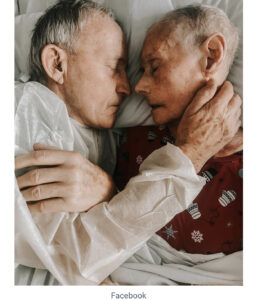 “Through this, I have realized that the most romantic love story isn’t Romeo and Juliet… But it’s grandma and grandpa who grew old together.”

“It’s grandpa sticking by grandma’s side during the most difficult period of her life. It’s him learning to prepare meals, do laundry, and cook for her as she went through 6 rounds of chemotherapy.”

“It’s grandpa holding her hand, attending every doctor appointment and not leaving the house unless someone took his place as he didn’t want her sitting alone, even for a few minutes.”

Emily said staff at the hospital constantly commented on his devotion to her and how everyone loved watching them together. 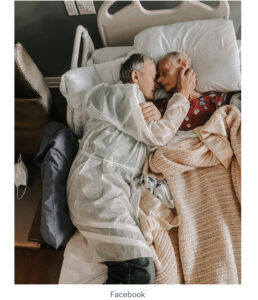 He stayed by his wife’s side every single day while she was in the hospital and then while she remained in hospice. He held her hand every chance he could and kissed her forehead, making the most of every moment they had left together, Emily recalled.

The loving granddaughter noticed how her grandfather’s eyes would fill with tears every time he thought his wife might be uncomfortable or in pain.

Her grandmother also suffered multiple strokes and her body grew frail and yet he told her every day how beautiful she was.

‘Goodnight my honey’
“They had that kind of forever love, the love we all aspire for. They would have been married 60 years next month, and yet, 60 years still wouldn’t have been enough,” Emily wrote.

“‘Oh you’re so precious, goodnight my honey,’ are the last words he spoke to her.”

Emily said her grandparents met at a cycling club in England in their 20s but during this time they took part in “the most important race together.”

“They won the greatest race of all, a life full of love together. And what a blessing it’s been to watch this beautiful love story and to be able to capture one of their last precious moments together.”

I’m so glad Emily shared this beautiful story which shows us what the true meaning of love really is. Please share.