Young man reunites with birth mom after 20 years, learns they both work at the same hospital

Two women from Utah had an extra special Mother’s Day because this year, a young man got to meet his birth mother, and the woman who adopted him was able to reunite with the woman who made one of the most difficult decisions in her life more than 20 years ago.

When Holly Shearer was 15 years old, she made the most difficult decision of her life and placed her newborn son up for adoption.

“He deserved a mother and a father, a home with a playset in the backyard that he can play on, a dog, all of those things I couldn’t give him,” she said.

The day before Thanksgiving in 2001, Holly met her son’s adoptive parents, Angela and Bryan.

Angela and Bryan had struggled to conceive and were ecstatic that the teen had chosen them to love and care for her child. But they could tell Holly loved her son with all her heart. 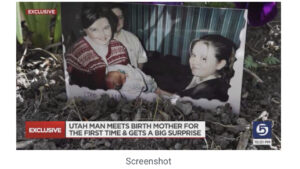 For the next 18 years, Holly was in the dark about her son, Benjamin. It was a closed adoption, so all she knew was the adoptive parents’ first names and the first letter of their last name. She had no way to contact them or Benjamin.

The same went for the Hullebergs, even though Benjamin wanted to find his biological mother, he no information.

“I kind of grew up wanting to meet my birth mom,” Benjamin told KSL TV. “To talk to her and, more than anything, thank her because I knew that I had been given a really good life, full of opportunity.”

While Benjamin was unsuccessful at finding his biological mother, Holly found him. After spending some time on Google she found his social media pages and began watching him to see the kind of young man he grew up to be. 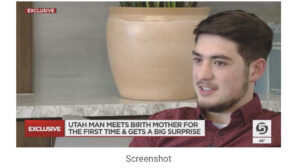 When Benjamin turned 20, Holly reached out to him.

You don’t know me, which is weird to have a stranger message you. Twenty years ago, I made the hardest decision of my life and placed my beautiful little baby up for adoption with a beautiful family. I have no intention of flipping your life upside down. I have thought about you every day and finally had the courage to send you a message. Wishing you a happy birthday.
Rather than being put off by the message from a stranger, Benjamin was thrilled. He quickly arranged so he, Holly, and his mom Angela could meet for dinner.

While the three caught up, they realized something interesting. Both Benjamin and Holly worked at the local hospital. Holly worked in the heart center, and Benjamin volunteered in the NICU.

“He was so close to me the whole time,” Holly said.

The two mothers were extremely grateful to be able to reconnect after so many years. Angela saw how much love Holly still had for Benjamin, and Holly beamed with joy knowing the wonderful life Angela and Bryan were able to give her son.

“Words can’t even describe how thankful I am for her,” Holly said. “She’s given Benjamin a wonderful life.”

I can’t imagine the pain and heartbreak Holly went through when she gave her son up for adoption. And then to be able to reunite with him 20 years late… what a Mother’s Day!