If there’s anything Gabriel Clark has loved since his childhood, it’s woodworking. Around the age of three or four, the 12-year-old’s mother handed him his grandfather’s hammer and since then he has enjoyed the art. “I’ve always had a real passion for it and I’ve just taught myself everything I know,” Gabriel told PEOPLE. The school-goer also has an innate desire to give back to his community and this spring he will be doing so by helping children in the war-stricken Ukraine.

His artist mother, Teresa McCann Clark, is extremely proud of her son. “The main thing about Gabriel, he’s got a really, really big heart. He’s talented, he’s creative, but more than anything, he’s got a big heart,” she shared. The Cumbria, England resident recently gained popularity after his father Richard Clark shared a post revealing how the little tot had been saving up for a mountain bike by selling his handcrafted wooden bowls and cutting boards.

Lovely twitter people – I don't know how many of you are also #instagram users but I'm looking for a wee favour. I've a 12yr old who loves woodwork. He spends hours on his lathe making bowls and creating chopping boards which he's sells to save up for a mountain bike. 1/3 pic.twitter.com/Ny60rFf1TE

“I don’t know how many of you are also #instagram users but I’m looking for a wee favor. I have a 12yr old who loves woodwork. He spends hours on his lathe making bowls and creating chopping boards which he sells to save up for a mountain bike. So I was wondering if any of you fancied giving him a boost and following him on Instagram at clarkie_woodwork it would make his day. Thanks in advance and feel free to retweet!” read the tweet from March 25 which attracted thousands of followers within hours.

While navigating through this newfound fame, the young craftsman has decided to turn this popularity into a unique chance to help others. To this end, Gabriel launched a raffle for one of his handmade bowls which features a blue and yellow ring, the colors of Ukraine’s flag. “I want to know that I can make other children’s lives better by doing a little bit of something in my own life,” he said according to PEOPLE. 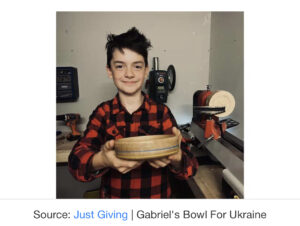 As of Monday, he has already raised £241,275 ($314,243) and on Sunday, Gabriel announced the winner through his Instagram page. “We have a winner!! We feel we shouldn’t say who until they agree but we can say that the winner was on page 940 donor 8! My Bowl For Ukraine has a new home. Even though the raffle is finished, we’ve kept the Just Giving page open until next weekend as donations are still flooding in,” read the post.

ADVERTISEMENT
Gabriel told PEOPLE that he had been feeling a “bit down” and how that prompted his father to send out the viral tweet. “I asked dad if he could put something out on his Instagram or Twitter. He put out a bit of a tweet saying, ‘My son’s a little bit sad. Can you go support him by following his Instagram?’ And instantly, it completely blew up,” recalled the little craftsman.

Share on Facebook
American used car prices might surprise you
Used Cars | Search Ads
|
Sponsored
A Cat Gives Birth, But Then The Vet Realise That Their Kittens Are Not Kittens, Call Cops
BestFamilyMag.com
|
Sponsored
Restaurant Owner Gets Letter From Customers Who Didn’t Pay
High Tally
|
Sponsored
Blind soothsayer who predicted 9/11 said Donald Trump will suffer a brain tumor in 2020 that might be fatal
Heartbroken family pays tribute to infant girl who was murdered: “A huge void in all our hearts”
Mother shocked as she walks in to find her 18YO son in bed with her brother’s 34YO wife & is torn between what to do
“I didn’t confront them I was so in shock,” the mother said.
Newsner
Father who sexually assaulted his 3-year-old daughter says he mistook the toddler for his wife
Firefighter rapes 7-year-old girl as his wife watched, said they “were trying to teach her how to have a baby”
MOST POPULAR
Camel toe underwears are the new fashion trend and people are clearly loving it for its “unique” appeal
Newsner
Melania Trump burst into tears of despair when she found out Donald Trump was going to be President, reveals book
Recommended for you