It’s unusual to find someone who doesn’t have a cellphone these days, most of us wonder what we ever did without one.

While we’re all guilty of using our phones far more than the recommended screen time this is particularly poignant for teens who are on their devices the most; 95 percent of teens have access to a cellphone, per a Pew Research Center report.

For those parents with teenagers, you’ll know it’s hard to pry their device from their hands, and to achieve this often means you have one grumpy teen on your hands.

But the need to take your device everywhere can come with risks. One grieving family lost their teenage daughter after she took her cellphone in the bath with her.

Madison Coe, 14, from Lubbock, Texas, reached for her phone while taking a bath in July 2017. 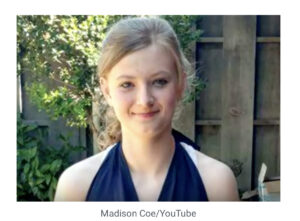 Police in Lovington, New Mexico, said at the time the victim appeared to have been electrocuted and they found a cellphone, charger cord, and extension cord in the bathroom. Madison had a burn mark on her hand from where she held the phone.

Her devastated parents wanted to warn other people of the dangers of charging their devices while in the bathroom around water. We’ve long heard about the dangers of mixing electronic devices and water, but we can sometimes forget the risk of electrocution.

“We don’t know if she reached down with a wet hand to try and pick it up, or if it fell into the bathtub with her,” her father, Logan, said.

“This is just one of many examples of people not being able to set down their cell phone. We’re all guilty of it,” he added.

“We don’t want to see anyone else lose loved ones over something so avoidable,” Logan added.

“She was a borrowed angel, and heaven has her back,” Madison’s mother said.

The couple later found the last picture that Madison sent on her phone – a photo showing her frayed cell phone charger attached to an extension cord, lying on a towel on the bathroom floor.

It’s a tragic reminder of how a terrible tragedy like this can happen in a split second. But Madison’s family also wanted to share their story to serve as an example to others. 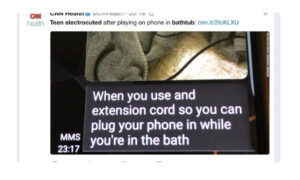 “Phones, extension cords, electricity and water do not mix,” Owens told KOB. “Parents, love your children, kiss them daily, hug them often, cherish every moment. Our children are very precious, they are one-of-a-kind, they are one in a million and nothing can replace them.”

Unfortunately, Madison’s story is not the only one with tragic consequences, which shows the importance of keeping her memory alive and informing others about the dangers. 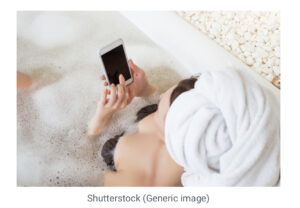 In December last year, a 13-year-old girl in France was fatally electrocuted in her bathtub after her charging cellphone fell into the water.

Rescue workers were initially able to revive the girl, whose name wasn’t released, as per Daily Sabah. She was taken to the hospital where she remained in a coma, but died days later.

The girl’s mom also wanted to send out a warning to other parents as most teenagers have their phones “implanted in their hands.”

“We really have to insist: no phones in bathtubs because it can end so dramatically,” she added.

Richard Bull, 32, from England, also died after dropping his phone in the bath while it was charging. Plug sockets are not allowed in UK bathrooms but in this case, a charging cable was found running from the hallway into the bathroom. 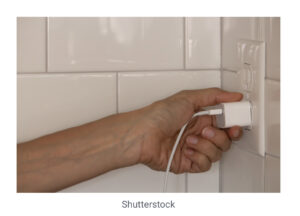 Following his death in 2016, Sheila Merrill, the public health adviser to the Royal Society for the Prevention of Accidents, said this sort of incident was rare but said, “people need to be aware of taking an electrical appliance into the bathroom”.

She told the BBC: “The advice has always been given with regard to hairdryers and radios – not to use in the bathroom.

“If you have got any appliance attached to the mains electricity circuit you have to be aware there is a danger there. You’re risking death. Electricity and water don’t mix, but particularly with phones, people don’t probably always think about it. It’s not advisable to use them while they’re plugged in, particularly in a bathroom situation.”

It’s important to never use cord-connected appliances while in the bathtub, don’t charge your cellphone near water, and make sure the plugs in your bathroom and kitchen are up to date.

We’re always told to keep electrical appliances away from water but we often don’t put cellphones in this category.

There’s nothing much we can say to comfort Madison’s parents, and no words are going to bring her back – but please share this important warning with your friends and family to prevent this from ever happening again!