Dad, who stabbed friend for raping his 8-year-old daughter, released from jail: “Everyone is on his side”

A father in Russia allegedly killed his friend after finding a video of his 8-year-old daughter being raped by him. Thirty-four-year-old Vyacheslav M had been drinking with his 32-year-old friend, Oleg Sviridov, on the day he happened to see the stomach-churning footage on his phone.

The father could not believe his eyes and so he immediately decided to confront his longtime friend, who fled the location before that could happen. Thus, Vyacheslav went to the police, who launched a manhunt for Sviridov. But before the cops could locate the rapist, the victim’s father got to him first and allegedly stabbed him to death.

Russian dad hailed as hero for killing friend who allegedly raped his daughter
Oleg Sviridov had been a babysitter for the girl on numerous occasions and allegedly sexually abused her multiple times.https://t.co/HbKolRysaj

According to the Australian news site, news.com.au, Sviridov had been a babysitter for the man’s daughter on many occasions. Unfortunately, this meant that he had possibly sexually abused her multiple times. Police also found videos of three other children on Sviridov’s phone in which the kids were allegedly filmed being sexually abused.

Understandably, the father flew into a rage and began his own manhunt for Sviridov. After killing him, Vyacheslav claimed that the alleged rapist “stumbled on the knife during a quarrel” in a forest near the village. Although the father was eventually detained by the police, people hailed him as a hero and voiced that he should not face murder charges for avenging his daughter’s rapist.

“He is not a murderer — he protected his daughter and our children too. Everyone is on his side,” said one according to New York Post. “All parents are standing up for the pedophile’s killer,” said a prominent television journalist and former Russian presidential candidate, Ksenia Sobchak. He was subsequently released from custody after his neighbors “collected the money” required for hiring a good lawyer, reports Daily Mail.

Another father found himself in a similar situation back in 1984 when he learned that his son had been groomed, raped, and kidnapped by his karate coach. Gary Plauché was worried sick when his son Jody, who was 11 at the time, went missing. He had been kidnapped by his teacher, Jeff, in February that year, according to The Advocate.

But even before Jeff took Jody away from his family, he had been molesting the little boy right after he joined his karate classes at the age of 10. While Jody considered his coach his best friend, the pedophile exploited him. “It was over several months before he ever started to do anything, and he had already been testing the boundaries,” recalled Jody as an adult.

“He had begun the grooming process, not just on me but my family,” he added. In no time he was being raped and then on February 19, 1984, Jeff kidnapped Jody but thankfully police were able to track them down a week later. When Jody was brought back home, his parents, Gary and June were glad to finally see their boy.

An investigation later revealed that Jeff had been raping Jody all this time. So when the 25-year-old culprit was caught and was being brought back, Gary dressed himself up in a baseball cap and sunglasses and waited at the Baton Rouge Metro Airport in Louisiana near the phones. As his son’s rapist was being escorted by a police officer, Gary pulled out his gun and shot the man in front of news cameras.

While Jeff succumbed to his gunshot injury, Gary pleaded no contest to a manslaughter charge and was sentenced to five years of probation. He did not spend a day in jail for gunning down his son’s rapist apart from the time he spent in prison before his trial. 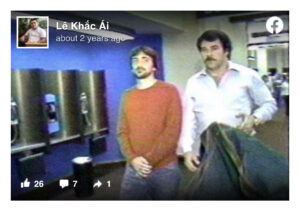