5-year-old empties piggy bank to pay for classmates’ milk, what happens next is truly heartwarming

What began as a simple act of kindness for a friend grew into a nationwide display of compassion and generosity thanks to a 5-year-old girl named Sunshine Oelfke. The kindergartner from Ishpeming, Michigan, touched the hearts of countless internet users a few years ago when the heartwarming story of how she emptied her piggy bank to try and help a classmate who couldn’t afford milk at school went viral on social media. Speaking to CBS News about the touching incident, her grandmother, Jackie Oelfke, revealed she was intrigued when she noticed Sunshine empty out her piggy bank onto the living room floor.

“That piqued my curiosity,” she said. “Nobody messes with the piggy bank.” When asked why she’d decided to break into her savings, the little girl told her that she was “taking it to school for milk,” Oelfke told TODAY Parents. “I explained that I had already paid for her milk for the month, then she looked at me and said, ‘My friend’s mom doesn’t have milk money, and I do.'” The Michigan grandmother revealed that young Sunshine had been saving up to purchase a snowmobile but was willing to use her savings to help a friend. The following morning, Oelfke and Sunshine met with her teacher, Rita Hausher, at Birchview Elementary School and handed her the $30 the kindergartner had saved, explaining what it was for. 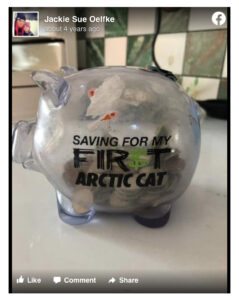 Hausher, who has often covered the cost of milk money for students herself, said she was deeply moved by Sunshine’s act of kindness. “I have always felt sad when I have had to tell a student, ‘no,’ when they ask if they can have milk,” she. “Thanks to Sunshine’s act of kindness for one student, it has grown so much that it now includes everyone, which makes my heart happy.” Out of the 20 kids in Sunshine’s class, about half reportedly didn’t get milk every day at school. As it costs $0.45 a carton, about $180 a month is needed for every child in the class to have milk every day during snack time.

“Milk is important in our family, so it’s very important for Sunshine’s friends to have milk with her,” Oelfke said. After a tearful video of the proud grandmother explaining her granddaughter’s mission went viral on social media, many reached out with offers to donate toward the cause. Given the overwhelming response, Oelfke started a GoFundMe campaign in the hopes of raising $700 to cover the cost of milk for the entire semester. However, Sunshine ended up raising nearly $20,000 as strangers from across the nation donated to her “Milk Money Mission.”

5-year-old Sunshine Oelfke—truly a personification of her name—emptied out her piggy bank on the living room floor of her home in Ishpeming, Michigan, and started counting. pic.twitter.com/7t8VC8R2B0

However, Sunshine doesn’t see her kind act as a big deal. “I am taking milk money to school for my friend, because my friend wants milk, and I want my friend to get milk, too,” she said. “We like chocolate milk — together.”