Nine children have lost their lives in a multi-vehicle pile up that killed ten in Butler County, Alabama at the weekend.

According to tragic reports, the crash, which occurred on Saturday, involved eight children aged between 4 to 17 from the Tallapoosa County Girls Ranch, which provides a home for neglected or abused school-age children.

Meanwhile, a 29-year-old father and his 9-month-old daughter, traveling in another vehicle, were also killed, as per Butler County Coroner Wayne Garlock.

A crash on I-65 in Butler County Saturday killed 10 people, including nine children.

One of the vehicles involved was from a Tallapoosa County Girls Ranch. The driver of the Girls Ranch bus was pulled from the vehicle by a bystander.https://t.co/HbUWJELXG8 pic.twitter.com/7rYrISEiMG

The accident came as the area was hit by storms that swept through the state of Alabama over the weekend.

An eyewitness to the incident said the weather had been bad for around an hour prior to the crash. CNN producer Lacey Willis was in another vehicle involved in the multi-car accident, and said the first she knew of it was when she felt an impact that forced her car into a guard rail and off into the grass on the median.

It was then that her husband, who had been driving, told her they needed to get their daughter out of the vehicle.

The Tallapoosa County Girls Ranch announced that one of their vehicles was involved in the accident and are requesting prayers. https://t.co/01SOhnJWcW

As per CNN, Lacey said they were walking away from their car when she saw other vehicles starting to catch fire.

“I’m barefoot, standing on I-65, walking, walking far enough away,” she said. “I was just praying.”

She continued that she was “very grateful” her family was able to “escape” but admitted “there’s a little guilt aspect.””Those families’ lives are changed forever, and I hope that somehow people will find a way to be OK.

“Because this was tragic for a lot of people. We are very, very fortunate.”

The driver of the bus from the aforementioned Tallapoosa County Girls Ranch, who was also the director at the ranch, was pulled from the burning vehicle, but the girls in the back could not be reached in time.

Michael Smith, CEO of the Alabama Sheriffs Youth Ranches, said that the driver lost two of her own children in the crash. 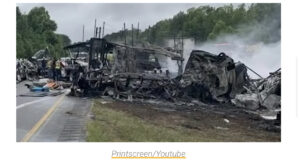 “Her life was saved, and we’re so blessed with that,” Smith said. “Unfortunately we lost the other eight passengers.

A truly sad day indeed. Please join us in sending prayers and thoughts at this most tragic of times.

Share this article to pay your respects to the victims of this terrible crash.