8-year-old boy dies a day after going home sick from school: “No signs of illness, nothing before”

A family in Oregan is left mourning the “sudden loss” of their “bright and cheerful” 8-year-old boy. Amari King Churchwell passed away in November last year after falling sick at school a day before.

Amari arrived at school on Monday, November 8, and fell ill shortly after, according to a GoFundMe account that was set up by the boy’s family to support his immediate family. When he went home shortly after that day, Amari collapsed in his father, Kenneth Churchwell’s arms.

Kenneth immediately rushed his son to a local emergency room where preliminary tests revealed a mass in the back of the boy’s brain that started bleeding internally. Doctors inserted a drain to reduce pressure on Amari’s brain and transferred him to Doernbecher Children’s Hospital in Portland. 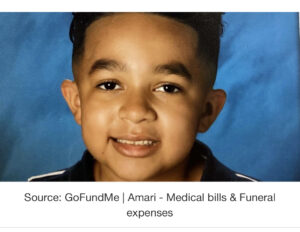 Despite the efforts of the medical experts, the boy, unfortunately, could not be saved. “Unfortunately, the bleeding mass left Amari with limited brain activity,” wrote the family. “After much prayer, CT scans, consulting with three neurologists and exhausting all options, we had to face the devastating fact that Amari had passed.”

Speaking to Fox12, Kenneth shared that doctors said the mass on his son’s rain was near the stem which had caused swelling. Amari’s mother, Dawn Churchill told the station that her son had “no signs of headaches, no signs of illness, nothing” before his death.

When Amari returned home after school on Monday, his health took a turn for the worse as couldn’t even get out of his shirt without the help of his father. “His head just kind of fell back and his eyes rolled back, and then I knew right away something was wrong,” recalled Kenneth of the devastating moment.

When they arrived at the hospital, the father was informed by doctors that Amari had suffered a seizure. The news they bore next is every parent’s nightmare. They claimed that “no surgery could bring him back.” With Amari’s death nothing remains but the memories of the precious moments he spent with his loved ones.

His parents shared that their ate son wished to become a doctor for children in the future. Kenneth noted that his boy’s aspirations “were just huge.” He added, “I don’t know how his cheeks didn’t hurt because he was always [smiling] all the time.”

ADVERTISEMENT
“We are all absolutely devastated by Amari’s passing, and he is forever ingrained in our hearts as a intelligent, inquisitive, kind and happy boy who loved his family, school and Jesus,” read the fundraising page. The donations collected were said to go towards the “costs related to the passing of Amari King Churchwell.”