Graduating from college is a rite of passage and at times it is also a privilege. Some people can only dream about being about to go to college.

While after some time those people may give up on this dream, there are others who do not relent. Betty Sandison is one of those people and after six decades of dreaming, she finally did it!

Betty Sandison just turned 84 a few days ago and marked her 84th year on earth with some great news; she graduated from college!

Sandison was the first in her family to go to college, she says, “I grew up on a farm with no electricity.”

Sandison first started college in 1955 and earned a certification for becoming a licensed practical nurse from the University of Minnesota. After a year, she was facing financial issues and decided to pursue a teaching degree instead.

But in the middle of that degree, she had to put everything on hold because she was getting married and wanted to have children herself.

Life went on and in the 1980s, Sandison worked her way to an associate’s degree and went on to work as a registered nurse and retired in the profession as well.

However, a friend of hers pointed out that this is not all she had wanted from life.

“It was something I’ve always wanted,” she said. “She said, ‘What’s stopping you?’ and I didn’t have an answer,” Sandison recalled of her conversation with her friend.

So after a 60-year gap, Sandison went back to college. In 2018, she started her journey again in college to finally earn her degree.

And four years later, 84-year-old walked on stage to collect her bachelor’s degree in multidisciplinary studies from the College of Continuing and Professional Studies. 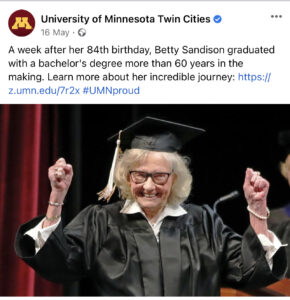 A beaming Sandison shared, “I’m really proud of myself. I mean, it was a goal — a dream fulfilled.”

“It gave me so much joy and I looked at them I thought, this world is going to be just fine,” said Sandison of the younger pupils in her class.

She went on to encourage other people to go after their dreams, no matter what age they are, “People say, ‘I could never do that,’ and I say, ‘Yes, you could if you want it bad enough.’”

Sandison only had 25 credits left to finish her degree. Her friends and family threw her a party to celebrate this achievement of a lifetime!

Betty Sandison’s story shows us that we are never too old to achieve our dreams!

Share Betty’s story to encourage your friends and family to follow their hearts no matter what age!