The funny thing about friendship is that it can quite literally come in any form or size.

Friendships occur often in the most unlikely of places, and perhaps one of the most interesting elements of a good friendship is that at any time, on any given day, you could meet someone who will change your life in the future.

Now, the foundations of a great friendship have their anchor in the unspoken agreement between two people that they are there for one another. A friend will listen or talk when needed, will offer advice or support, and will generally be an individual you can turn to when the chips are down.

Of course, a friendship requires two people, and the very best of them see an equal divide in the workload.

Two friends from Texas, Odin Frost and his besty, Jordan Granberry, perhaps best sum up what we mean. One is black, the other white, and both live rather unique lives …

2 best friends given low chance of survival defy the odds and graduate high school together https://t.co/Vqeu6LLrCh

The pair in questions’ journey started when they were just toddlers. Both had been born with bleak outlooks hanging over their heads, but both were loved and supported by strong families.

According to reports, Odin and Jordan shared a somewhat frightening statistic at birth: doctors had given each boy just a 2% chance of surviving. Not only that, but the boys stayed in the same NICU, in a Dallas hospital, though at different times.

Odin had been born three weeks early to a 40-year-old mother who experienced preeclampsia during pregnancy. This led to bleeding in the baby’s brain. Jordan, meanwhile, suffered from a blood infection in the womb and was starved of oxygen. This meant that he was left with permanent brain damage.

Yet though experts gave them slim hope of survival, survive they most certainly did! Over the years, Odin and Jordan have grown together, enduring hardships and the trials and tribulations of life by each other’s sides.

Odin learned to walk at five years old, while Jordan took his first steps at 18. Both of them have also outlived their diagnoses by several years.

Odin and Jordan first crossed paths when they were three at the Wayne D. Boshears Center for Exceptional Programs.

There, they were photographed alongside each other, with Odin’s dad Tim stating: “Their very first day of school, they were put in the same classroom. They pretty much had this immediate bond. Neither one of them could speak, but wherever the other one was, they were always together.”

It was the beginning of a friendship that would transcend a number of norms. For a start, neither Odin nor Jordan could talk, but that didn’t stop them wanting to be around each other. They listening to music at school and during car rides, pinched each other playfully, and giggled while getting their hair cut by Jordan’s mom, Donna. 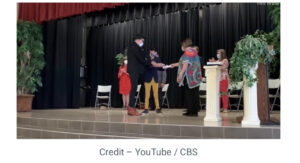 Fast forward to 2020, and the boys were due to graduate together from the same school.

Both Odin and Jordan proudly took the stage to accept their diplomas, and were then able to fittingly recreate that famous first photo they had taken back when they were just three.

Perhaps unsurprisingly, the internet responded well when Tim uploaded the graduation image – alongside the one from when Odin and Jordan were toddlers – to Reddit.

One person wrote: “AWESOME!! I’m a disability support worker and it is also great to see they’re such good friends. Many of the adults with intellectual disabilities that I work with struggle to find friends, partners.”

Tim said his goal in posting the photo was to inspire others, and demonstrate the heartwarming friendship Odin and Jordan share.

He said: “Just because something doesn’t look like ‘the normal’ doesn’t make it any less than. Both of the boys have more personality, drive, wit, humor, and joy in them to fill anyone’s heart with joy. The determination to live and live fully that both of these amazing humans have should inspire and feed hope to anyone who may be looking for it.”

I don’t know about you, but I think a lot of people could take a valuable lesson out of the book of Odin and Jordan’s friendship.

Life can be trying sometimes, but things are always easier with a good friend by your side.

Please, share this article on Facebook if you agree that a good friend is vital in life!