A mysterious and gruesome discovery has an Indianapolis, Indiana community grieving a terrible loss.

The bodies of three young children, aged 1, 2 and 5, were discovered in a vehicle after it was pulled out of a pond on July 12 in Indianapolis. Just moments earlier, the body of an adult man had been found and extracted from the same pond.

The Indianapolis Metro Police Department is suspecting that the man is father and Indianapolis resident Kyle Moorman who, alongside his three children, had been missing since July 6.

The father and three children were not seen since that Wednesday, after Moorman announced he was driving to his brother’s house to go fishing. 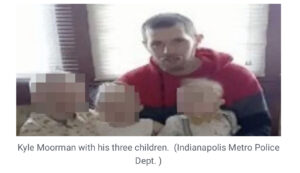 The disappearance was reported by the Indianapolis Metropolitan Police Department on Sunday, July 10.

According to police, Moorman’s cell phone had most recently pinged near the pond, which prompted them to search the area.

While the police have refrained from fully confirming that the identity of the deceased are indeed Moorman and his three children, all evidence currently points in that direction.

“There is commonality with the Moorman family,” a police officer said during a news conference at the scene.

“We can’t verify, in fact, that Kyle Moorman and his three children Kyran, (1), Kyannah, (2), and Kyle Moorman II, (5), were inside the car or in the pond, but at this point all signs point to them,” he added. “We want to extend our condolences to the family and friends hurting tonight knowing their loved ones are no longer with us.” 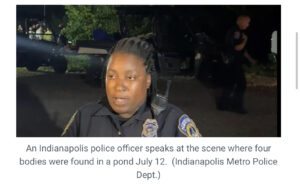 According to the police, the vehicle found in the pond matches the one Moorman was said to have been driving when he and his children disappeared.

So far, the tragic incident is being treated as a death investigation, the officer at the press conference said. He added that many questions remain unanswered surrounding the circumstances of the deaths. 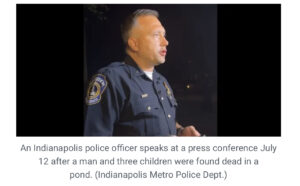 Earlier on Tuesday, the same day the bodies were found, Moorman’s sister announced that the family was offering a $10,000 reward to anyone who could offer help in locating Moorman and the three children, according to Fox News.

“The is heartbreaking for everyone involved regardless of the circumstances. We know a man and three kids are dead tonight. We don’t know why and we don’t know how,” an officer at the scene said. “We all need to support the family and wrap our arms around them tonight and in the days that are to come as they grieve this loss.”

What a shocking and terrible discovery. Everyone, and children in particular, should be immune from this kind of tragedy, no matter what the circumstances! May they all rest in peace.