Bus driver hits brakes after seeing two children, 6 and 2, walking alone without coats in the snow

A hero bus driver who pulled over to help two young children walking in the snow said it was fate that led her to those youngsters that day.

Had she not started her route five minutes early that morning she wouldn’t have seen a six-year-old boy and his two-year-old sister wandering in the snow without an adult.

Neither of the kids had coats on, and the toddler was just dressed in a t-shirt and diaper with nothing on her legs.

Bus camera footage caught the moment when Nicole Chamberlain first spotted the children shouting “whoa” and quickly stopped the bus on a snowy morning in Wisconsin when the temperature was just 18 F (- 7C). 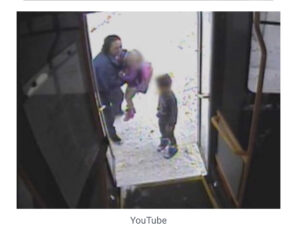 The bus driver saw the two children walking alone and not properly dressed for the weather and knew something was wrong.

“The little girl only had on a t-shirt and diaper and neither of them had a coat on,” Nicole Chamberlain said.

“They were headed toward a busy intersection and I knew there was no school bus stop down there, or school, so I knew right away I had to pull over and help them.”

The bus driver stepped out of the bus and asked the children what they were doing out on such a frigid morning. The children told Nicole they were looking for their grandmother. 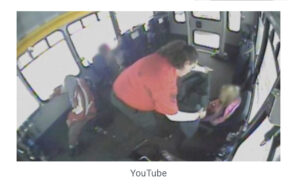 She told WISN: “I said, ‘Come with me, I’m gonna put you on the warm bus and I’ll help you find grandma.’”

She took the two-year-old in her arms and guided the six-year-old onto the bus, sat them down, and called the police. She even put her coat over the toddler’s bare legs to make sure she was warm before calling for help.

The children had been reported missing by their grandma who had been watching them but had to go down into her basement. When she came back up the children were missing.

The two little adventurers said they had walked out of the house looking for their grandma and got lost. 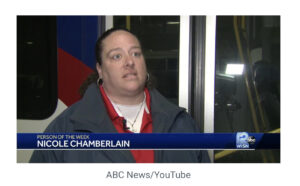 No charges were recommended by the police since the situation was “accidental.”

Meanwhile the bus driver was very modest about her heroic actions that day saying, “If that were to happen to my children, I would hope that there would be somebody — a decent human being — that would stop and help my kids.”

Nicole was these children’s guardian angel that day, thank goodness she was there to help them.