Last month a North Las Vegas police officer made a decision that would change the lives of five children. Officer Nicholas Quintana was having his lunch when received a report of a homicide case on January 14. Although there were several officers on duty, a strong emotion overcame him and he was persuaded to respond to the call himself.

“Trying to enjoy my lunch and this urge, this abrupt urge, that’s the best way I can describe it, came, and I ended up going to the call,” he said while speaking to local news station FOX5. Quintana immediately rushed to the scene of the crime only to learn that a 40-year-old woman named Emily Ezra had been taken into custody for allegedly shooting her former husband, Paul Eza, while their five children were inside the home.

As a result, Emily was charged with open murder with a deadly weapon. This meant that the five kids were left with no parents to take care of them. This situation felt very familiar to Quintana who revealed that his father was murdered by a relative when he was quite young. “For me, it brought back a memory from my childhood where my father was killed by a family member of mine,” he explained.

“That’s sad. That’s extremely sad because now these kids are going to go to Child Haven,” Quintana added. As other responding officers were leaving the scene, Quintana couldn’t help but wonder about the welfare of children. Thus, he decided to discuss fostering the kids with his wife, Amanda, who seemed to have some reservations about the proposal.

“Understandably so, she was absolutely reluctant towards it. I was like, ‘Well listen, hun, just meet them, because you might just fall in love with these kids. Just meet them,'” he shared, adding how they scheduled a meeting with Child Protection Services days later. “I look at the kids and I say, ‘Hey, look, the reason why we’re here is because I had a thought. I’d like to take every single one of you. I’d like to take you in our home,” he shared. “And the 16-year-old gasped for a sec and said, ‘Really?’ and I said, ‘Yeah.'”

Quintana went on to confess that being a father has always been a part of his plan. “I didn’t really have a father figure growing up. I’ve always longed for that father figure in to be a father, to love my child the way I would’ve loved my father to love me,” he explained. For Quintana, fatherhood has been a “very humbling” experience since welcoming kids into his home. 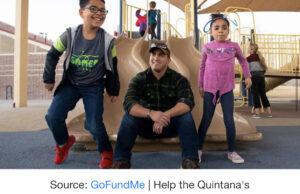 ADVERTISEMENT
The couple is now in the process of getting certified as foster parents and has since expressed interest in adopting the kids permanently. The Quintana are yet to obtain their fostering licenses and so they haven’t received any financial assistance since. Thus, the North Las Vegas Police Officers Association has set up a GoFundMe page to support the family.