Dad-to-be killed in crash just weeks before welcoming his first child, he was a “shining light”

A Massachusetts man was tragically killed in a car accident just weeks before welcoming his child. The heartwrenching incident unfolded on February 9 when the Massachusetts State Troopers responded to a car crash report between a tractor-trailer and a pickup truck on the eastbound side of the Massachusetts Turnpike a little after 9 a.m.

Officers revealed that the truck, which was driven by James Lucas, 35, had veered off the road and crashed into the back of a tractor-trailer. The tractor vehicle was parked in a breakdown lane at the time. Unfortunately, Lucas was pronounced dead at the scene, meanwhile, the operator of the parked vehicle did not sustain any injuries.

While the investigation into the crash remains ongoing, Lucas’ family is devastated by the loss. They remembered him as “being a shining light to all who knew him,” especially his “beloved wife, Ali.” According to a GoFundMe page created by his sister Sarah Torrice, Jim and his beloved wife Ali were extremely excited to welcome their first child together. 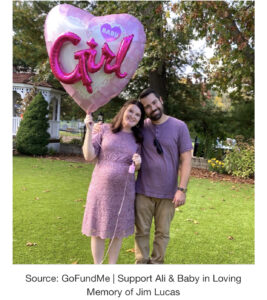 “Jim and Ali first met back in 2011 and immediately fell in love. After ten loving years together, Ali and Jim were so excited to welcome their first baby girl later this month,” read the tribute. “We want to help support Ali and Baby Ruby through this challenging journey ahead.” It continued to note how Lucas “touched the lives of so many people” throughout his life.

ADVERTISEMENT
“He made our community a better place and was always the first to offer help when needed,” it added. Had Lucas survived he “would have been an amazing father” noted one of his sisters Kristen Karabelas in a tear-jerking tribute. “I have been going through pictures the last few days and it’s hard to find one of Jim from the last 10 years that doesn’t have Ali right by his side. They were always a team. They’re also two of the kindest and most selfless people I’ve ever known,” she wrote.

ADVERTISEMENT
“I know he would have done anything and everything to provide for and take care of his family. The thought that he is now not going to be able to do that breaks my heart,” she added. The late would-be father also managed his family’s auto repair shop, which was a third-generation business. “He had an incredible sense of humor and loved making people laugh. He will be missed dearly by family, many close friends, and devoted customers,” read his obituary.

ADVERTISEMENT
Later Ali posted her statement on the fundraiser’s page. “I am so thankful to you all for thinking of Ruby and I during this incredibly heartbreaking time. I never imagined having to start this next chapter without Jim, the love of my life. He cared deeply about our little family and would be so grateful for your kindness. I am blown away by the amount of love and support coming our way. Your generosity will allow me to focus on creating happy memories with our daughter, something Jim looked forward to every day. From the bottom of my heart, thank you,” it read.