Firefighters are often the unsung heroes in times of unspeakable tragedies. They’re the first ones on site and are trained to deal with the worst circumstances that involve life and death. One such incident that involved two firefighters in a burning home showcases just how capable these men really are. In a recently surfaced footage from nearly two decades ago, a firefighter is seen showing extreme presence of mind that potentially saved the life of an infant.

Two firefighters, Bob Swick and Scott Lewis were at the site of a house that had gone up in flames on Hebble Avenue in Fairborn, Ohio. While one of the firefighters, Lewis was inside the building, a woman outside was desperately looking for signs of Lewis reappearing with her little baby, Chelsea. Smoke had engulfed the building, and afraid that they might be losing time, Bob Swick decided to climb up the ladder and help his partner in the search for the baby. But just as he got to the top, Lewis appears at the window, holding a baby in his arms. 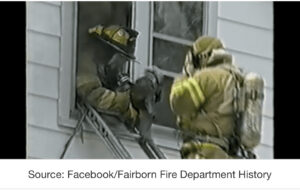 They had just emerged from a room full of smoke, and the infant might have quite possibly inhaled some of it. Swick immediately ripped his mask off and prepared to do all he could to save a life. Without wasting a single moment, and undeterred by the fact that he was climbing down the ladder holding an infant in his arms, Bob Swick began administering CPR on the baby. 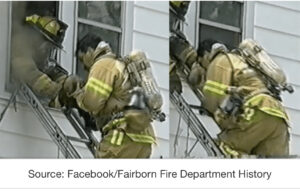 Swick showed extreme presence of mind and capability as he climbed backwards down the ladder, holding a baby in his arms, and administering CPR, all at the same time. Baby Chelsea was rushed to the hospital where she stayed for a week. The baby was trapped in a room full of smoke before being rescued, and had quite possibly inhaled an unhealthy amount of it during the time. 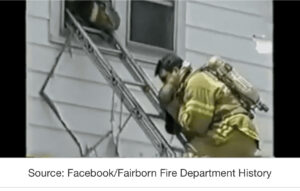 The bravery displayed by firefighters Bob Swick and Scott Lewis might be noteworthy for many, but for the men in uniform, saving lives is quite literally just another day at work. However, it goes without saying that it sure does leave a mark, both on the men who save lives and the ones who get to witness these instances in times of crisis.

The video, which is from May 2002, was shared in July 2012 by the Fairborn Fire Department History on Facebook. You can watch the whole video on Facebook by clicking here.