All parents can relate to the fear of having a newborn in their lives; no matter how many books you’ve read or new parenting courses you’ve attended, nothing can prepare you for that bundle of joy that needs so much.

But within hours of meeting their newborn for the first time, one couple then had to deal with taking her on a plane home.

Caren and Dustin Moore had been trying for a baby for almost a decade so decided to adopt. They had endured nine long years of fertility treatments, miscarriages and adoption stress.

The couple had been at the hospital in Colorado when the mother had given birth and had constantly worried that she may change her mind. But eight days later the excited but nervous couple were finally on a flight back to California with their adopted baby girl in their arms. 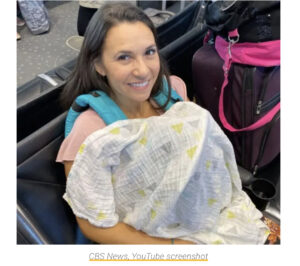 They apologized to Southwest Airlines staff midflight as their baby became fussy and asked if they could do a diaper change. A flight attendant named Jenny led the couple to a space where they could change their newborn.

“Jenny and another passenger complimented my beautiful daughter and politely asked what had prompted a flight with such a young infant,” Dustin wrote on Twitter.

“I gave them the shortened adoption story, to which they hastily offered congratulations, and shared a few more kind remarks.” 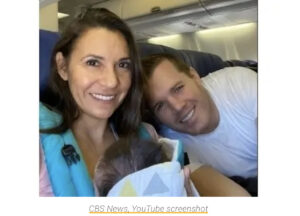 As the couple got back in their seats and settled their newborn, another flight attendant Bobby approached the couple and asked about their newly adopted baby, which left the couple confused.

“Five minutes later, Bobby came on the intercom and said, ‘Ladies and gentlemen, there’s a very special guest on the flight today. She’s only 8 days old and she’s traveling home with her mom and dad,’” Dustin recalled in an interview with The Washington Post.

The crew gathered the napkins, then read a few of their favorites over the intercom.

“Rub each other’s feet, and rub the baby’s feet.”

“Always tell her you love her.”

“Enjoy every minute. It goes by sooo very fast.”

The flight attendant then announced that they’d be handing out napkins for all passengers to write a message of advice and support for the new parents and the cabin erupted into cheers and applause congratulating the couple.

“We had no expectation they would have done something like that,” said Dustin, trying to hold back the tears. “I get choked up thinking about it.”

One of the napkins read: “I was adopted 64 years ago. Thank you for giving this child a loving family to be part of. Us adopted kids need a little extra love. Congratulations.”

He then shared that the crew would pass out pens and napkins to everyone, and anybody who wanted to share a word of advice or encouragement for our family was welcome to do so.

We sat in speechless gratitude, as people kept peeking over their chairs to congratulate us. /7

Another passenger wrote: “Enjoy every minute, because they will go faster than you think,” while another wrote: “Drink more wine.”

The couple were then presented with the 60 napkins along with a set of pilot wings.

They also found out that Jenny and Bobby were a married couple and a fellow flight attendant had done the same thing for them when they were on honeymoon. They wanted to pay it forward.

“What all of those perfect strangers and attendants did not know, was the emotionally tender state of two brand-new parents. Parents who after 9 years of trying had been blessed with their first child. Parents who felt scared, but determined in their new role,” Dustin wrote on Twitter.

I cannot imagine the fear this couple felt taking their newborn baby home on a flight after only just meeting her.

These flight attendants deserve all the recognition for making them feel so loved and supported on their trip home. I hope this wonderful and thoughtful gesture continues to get paid forward. Please share.