Not many can say they have a spotless attendance record, at least not as perfect as a student in Ohio who has not missed a single day of school since kindergarten. Blake Wolfe graduated from Westlake High School in Ohio after spending approximately 2,184 days at school since joining in 2009.

Of course, there were exceptions when he could not go to school like on days when classes were called off due to heavy snow. That being said, he never missed a day due to injury or sickness. Parents David and Dana Wolfe said that a big reason behind Blake’s attendance is him being a healthy kid who hasn’t even had a stubbed toe.

Moreover, he enjoyed school and also excelled in pretty much everything. During an interview with Fox 8, Blake opened up about wanting to miss school sometimes but noted how his parents and friends motivated him to do otherwise. “There were so many days that I just wanted to make up an excuse and stay home but my mom and my dad just gave me that extra push and coming to school and seeing my friends again it just made it all better,” he said during the interview. 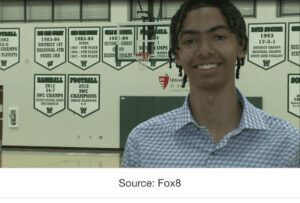 He made sure that he was packed every day at school. He used to play drums in marching band and lettered in track and basketball. While doing this, he would attend a bunch of classes and his favorite subjects were math and history. His mother, Dana Wolfe, is really proud of him. “Blake is a really good kid. He knew that school was very important and that we believed that he should be there every day,” she said.

Despite the gap, he was never tempted to slack off from studies. “Not seeing my friends was the hard part but I just got through it. There was one year left and no need to stop now. It just shows how committed I am to school and how important it is to me,” he said.

Having spent so much time in school, Blake felt a little sad while leaving but he cannot wait to set new records during college. Blake attends Blufton University on scholarship.