Horrified parents abandon newborn at hospital, then a woman steps forward and asks ‘When can I take him?’

We live in a world where success is about getting ahead and trying not to stand out too much. Because if you don’t fit in or are a little different from others, you’re considered ”odd” or ”abnormal.”

It’s a sad view of life, and it puts too much emphasis on how we look and how we compare to our peers.

Just ask Jono Lancaster, a person who’s flesh and blood just like the rest of us, but, unfortunately, has often been painfully reminded of just how cruel the world can be. 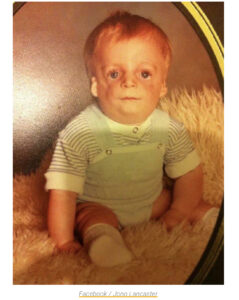 Jono Lancaster was born in England in October 1985 – but he didn’t look like other babies at the hospital.

The precious little boy had Treacher Collins syndrome, a rare congenital disorder that caused his facial bones to develop in an asymmetrical way.

After telling them about the diagnosis, the doctors also told Jono’s parents he would probably never walk or talk. It was too much for Jono’s shocked mom and dad, who abandoned him.

“When I was born, my parents were in total shock. I was out of the hospital 36 hours after I was born. Social services found someone to look after me. The foster carer was a lady called Jean,” Jono recounted at the 2015 Nord Conference.

When he was less than two days old, Jono’s parents put him up for adoption and disappeared. The hospital contacted Social Service and a wonderful woman named Jean Lancaster took Jono in and raised him.

Jean wasn’t scared or shocked when she saw the little boy. She just picked him up and felt an instant bond. Jean turned to the nurse and said, “When can I take him home?”

From the start, his foster mom gave him the love and care every child needs, and Jono couldn’t ask for a better and more devoted mother.

But even though Jono had great support from his mother, his early years were marked by reluctance from the outside world to show understanding.

When Jono went to school, he started to become aware of himself. He quickly understood that he looked different from his classmates.

“I kind of felt like I was on my own and I felt like I was the only one out in the world that was like me. People are lucky enough to win the lottery or they become professional footballers, doctors, lawyers but I thought, ‘Why did I have to end up looking like this?’” Jono said in an interview with Adelaide Now.

It’s important to know that Treacher Collins syndrome doesn’t affect a child’s intelligence in any way. The only thing Jono’s classmates cared about was the way he looked. They used to run away and pull faces at him saying they did not want to catch his “disease.”

“I used to hide how unhappy I was from my mom. She had already done so much for me,” he told the BBC in an interview.

Jono refused to give up and let the haters win, though, and by his side, he had a wonderful woman.

Jono’s foster mother, Jean, tried to reunite him with his biological parents. But after they returned her letters for five straight years, she took the next step — and adopted Jono on May 18, 1990.

“So I get two birthdays! I used to tell other kids that my mom went to the hospital and she looked at all the babies and she chose me, whereas their parents had been stuck with them,” Jono said at the 2015 Nord Conference.

Jono will never forget his foster mom – which he made very clear in an emotional Facebook post from 2015.

”This lady may be a little short in height, but this lady has the biggest heart out of every one I’ve ever met. This lady has been a foster carer for 30 years, she loves and has given herself to so many. This lady cried every time a child moved onto another foster home as she felt somehow she had failed them. This lady despite been a single mom in her 40’s took me on despite not knowing what the future held. This lady adopted me and along with Claire and Stephen gave me an amazing family. This lady is an angel, sent to me when I needed one the most. 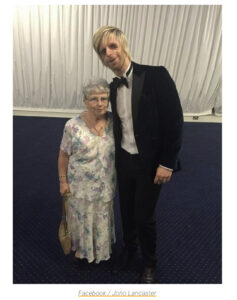 This angel’s name is Jean, my mum, my hero.”

As a teenager, Jono became very rebellious. Sometimes, he would do things only to draw attention. It was a way for him to deter people from the real problem: his physical features. He drank a lot of alcohol and tried to bribe people with sweets so they would like him.

“I was feeling so alone.”

But with love and care from Jean, and his own strong spirit, Jono soon decided to be a force for good and use his experience to help others.

Now 36 years old, Jono devotes his life to helping others around the world with Treacher Collins syndrome. He has been working as a team leader for adults with autism.

He meets children, gives them hope and support, and talks to their parents about their situation. Currently, Jono works as an inspirational teacher, often talking about Treacher Collins syndrome.

“My parents still want nothing to do with me,” he says. “What’s changed is my attitude, and that’s what’s so powerful. […] I wouldn’t change any of it. My attitude was more disabling than anything. With the right attitude, you can achieve anything.”

One of Jono’s mentees is two-year-old Zackary Walton from Australia.

Despite his young age, Zackary has already been bullied. In Jono, however, he has had a friend for life.

“When he said he was coming to Australia, we knew we had to meet him and it’s made us so happy to see Zack meet someone like him,” the boy’s mother, Sarah Walton, told Adelaide Now.

When Jono and Zackary met for the first time in November 2014, this picture was posted on Facebook — and it’s just so lovely to see.

In 2015, Jono met Laura Richardson while working as a fitness instructor.

They fell in love, and Laura embraced Jono and his condition. She saw him for who he was, and the couple teamed up to spreading positivity and smiles around them.

Until Jono met Laura, he always thought he would turn to adoption if he would have children and start a family.

“I’ve always dreamed of being a daddy. I crave father and son moments – my adoptive mum was absolutely amazing but I never had a father figure in my life, and that’s something I really, really want. I want to do the school run, take my child to dance, gymnastics or football – whatever they want,” Jono told BBC in 2011.

According to Jono, any child he fathers has a 50% chance of having Treacher Collins. So just the thought of having a child of his own caused a wave of emotions, morals, and self-questioning. Even though Jono was born relatively healthy, many children with Treacher Collins suffer severe medical problems, and some are born unable to breathe.

So maybe adoption was the best option, Jono thought.

”It worked really well for me, and giving a child a second chance, I think that’s brilliant. But Laura thinks she will have those instincts of really wanting to carry a child, and she’s worried that she might find it hard to look after someone else’s child – or that the child will just want to find its natural parents,” Jono said and continued:

”Plus she really wants our child to be ‘our’ child. And I really want to look after her when she is pregnant, for her to be on the sofa, or for me to run downstairs at 2am when she fancies a pickle.”

Sadly, Laura and Jono never had kids. After ten years together, they decided to split up and move on. Jono explained the decision on Instagram and stated:

”Myself and Laura shared 10 amazing years together and we decided to go our separate ways as we weren’t growing together as a couple. Nothing but mutual respect there and had nothing to do with appearance.

Some of his followers showed sympathy and tried to focus on the positive, encouraging Jono that something good can come out of a broken relationship.

”I don’t think breakups can ever be spun into sounding good. It was heartbreaking,” Jono answered.

Hear Jono tell his story in the video below. I promise it won’t leave you untouched.

Although Jono’s story is heartbreaking, it’s also incredibly uplifting to see his strength and courage and how he uses it to help other children in the same situation.

I really hope we can help Jono’s story get more attention. Not just to inspire others, but also to give hope and confidence to others who need it. Because we all need some inspiration now and then.

No one should ever be judged, bullied, or discriminated against because of their appearance! Share this article if you agree!