When an adult woman takes her frustration out on a child, it leaves you wondering which of the two is really acting like the petty child in the situation.

A woman who is being dubbed by the internet as “Sidewalk Susan” was seen hosing down the chalk art drawn by a little girl. And as she sprays the drawing away with an air of cruel contempt, the girl cries while helplessly watching her.

“This neighbor stood on her balcony and stared us down, then came out with her f—ing hose to hose down our chalk drawings. She didn’t tell us it was against condo rules nothing!!!” the mother of the little girl wrote in a post that was later shared on Imgur.

It as further revealed that when someone rushed to her house to confront her, the woman refused to open the door. “I think filing charges are in order,” the little girl’s mother added.

A number of people in the comments section came to their defense, seeing just how unnecessary it was for the woman to callously erase the girl’s innocent drawing. 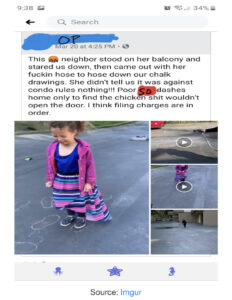 The mother later wrote, “Thank you guys for your kind words and support.” She also added how this wasn’t the first time the woman has poked her nose into their bubble; the mother has felt like the Sidewalk Susan targets them for no apparent reason..

“This lady has some issues with us. Yesterday the neighbor kid was out there drawing with chalk and she stayed inside. She messed with the wrong family,” the mother went on to say. “…Today she yelled at my daughter to shut up while she was playing outside.”

Commenting on the neighbor’s outrageous behavior, one person wrote, “This is unacceptable. This woman needs to be evicted. What is the landlord doing about this?” while another said, “Take your daughter out with pots and pans tomorrow.”

Growing frustrated with the neighbor, the mother finally lost it and lashed out. “I try really hard to keep a cool head ESPECIALLY with my child around. But today this salty, condo board b*tch left notices on people’s door banning the kids from using the empty fucking parket lot, THEN I see her recording/taking pictures of me when I went to offer the neighbors some food bars and water because they’re locked out. I try to compose myself when my kid is around.”

But that time, when her daughter wasn’t with her the mother said, “I CUSSED her b!^@# a$$ out as she ran back inside her apartment. I’m DONE WITH THIS LADY.”

The video of the little girl crying while Sidewalk Susan was hosing down was also shared on Reddit and a number of people talked about how unreasonable the neighbor was.

“I see a lot of shitty chalk pictures on the pavement in my street, but they make me smile regardless. Some kid spent ages drawing them, then proudly showing them off to their parents. It’s not permanent, it’ll disappear in the rain,” wrote MrsMellowCake. What kind of black, hateful heart do you have to have to go out and hose them off, let alone to do it while the kid is still there?!”

flowabout also wrote, “What is wrong with this woman?! The look on that girls face literally broke my heart.”

Please, some of us are wanting to locate the little girl/her mom in the #sidewalksusan vid? We wish to send her more chalk ♡ not everyone are cruel. I loved her art before that old dragon deleted it.

— August Peridot (@AugustPeridot1) May 6, 2020
One user, scarlittytitty also talked about how the current lockdown can be a lot for a child to handle and things like drawing with chalk on a pavement could be the highlight of the day.

“…How miserable do you have to be to be genuinely offended or bothered by chalk art. this little girl doesn’t get to hang out with her friends at school or go play on a playground,” wrote scarlittytitty. “She’s confused and sad and doesn’t fully comprehend what is going on in the world. she needs a break! All these people saying she’s vandalizing are the same folks who say kids spend too much time inside looking at screens. again, it’s chalk for f— sake. it washes off…”