When you want a new pet it’s always better to adopt from a shelter. It’s a chance to give a new life to an animal that’s homeless or abandoned.

And sometimes when you rescue an animal, they’ll rescue you in return. That’s what one man found out when his adopted dogs stepped up to save the day.

A man named Robert McGowan found two pit bulls in a local shelter. According to The Dodo, the dogs had had a rough life and were abandoned.

That’s not surprising—pit bulls are the most common breed of dogs found in shelters, and their reputation as aggressive dogs scares people away from taking them in.

But Robert opened his heart to the poor dogs, adopted them and named them Ellabelle and Ladybug.

He gave them a loving home, and the pit bulls proved to be kind, friendly dogs.

But in once recent incident, the dogs revealed their true character.

One night Robert was in his garage when suddenly he was assaulted by four strangers. They punched him, giving him a black eye, and were intent on stealing his car.

They demanded the keys, and Robert told him they were inside. Little did they know what else they would find in there.

Suddenly, the two pit bulls stepped up to their owner’s defense, barking and chasing the assailants away.

“They chased them out,” Robert told The Dodo. “My girls ran into the garage and stood over me.”

“They stood there barking, making it clear that no one was going to hurt me anymore. The four people took off.”

Robert says the dogs really are docile and not aggressive, despite the breed’s reputation… but they won’t hesitate to get defensive when their loved one is threatened.

It’s a story that proves how loyal and loving rescue dogs can be. It’s easy to imagine how things might’ve been if Robert hadn’t taken them home. Robert implored people reading his story to consider adopting.

“They are rescues. Unwanted dogs,” he wrote. “They saved my life. Please consider adopting a rescue. They might save your life too.”

Let’s hear it for these heroic pit bulls! Spread the word of how great rescues can be, share this incredible story! 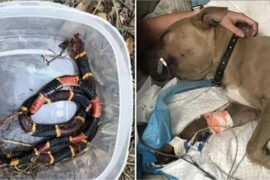 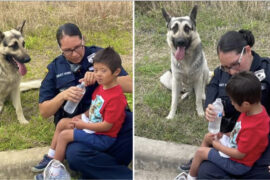 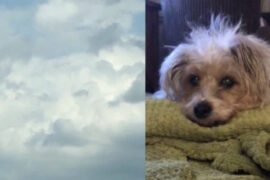