Iomikoe Johnson was 25 years old, married with four children, when she found out she had vitiligo – a condition that causes your skin to lose its color – but this was just one of many hurdles she would have to overcome in her quest to feel accepted.

She grew up in a small town in Ville Platte, Louisiana, where she had to fight to defend her religion and was subjected to abuse from her peers for the color of her skin.

“We were Apostolic, and they believed a woman shouldn’t wear anything pertaining to a man, like pants and shorts. So, people teased me because of it,” Iomikoe told Love What Matters.

“I was teased, not only for my clothes but also because I was skinny and dark-skinned. They believed having dark skin wasn’t beautiful. Boys would throw crickets on me and call me names like ‘dirty black roach.’” 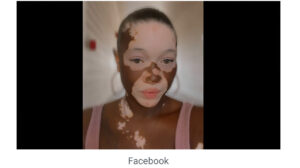 Thankfully her family moved from that town to another one where things got a bit better for her. She was allowed to wear what she wanted to and got a job.

At 17 years old she had her first child, a boy, which made her dad so mad she said he punched a wall but abortion wasn’t an option for her. Six months after she was married to a man she said had “swept her off her feet.”

She had met him when she was much younger and they had become friends before starting a relationship but one day he just disappeared. When they met again just after she had her son he told her the reason he had stopped communicating was because he had enrolled in the army and his family relocated to Arkansas.

“He said once he left the military, he was coming to get me so we could be together because I was about to turn 18. I explained to him I had a son. He was sad, but he told me he loved me and if he loved me, he would love my son, too.”

Just six months after giving birth to her first child Iomikoe was married and soon after they had a daughter together. But it wasn’t the joyous union she had envisioned. She worked hard taking care of her two children while going to college with a husband who worked offshore on an oil rig.

When he returned home she made the mistake of asking him to help her with the children and they got into an argument which resulted in her husband slapping her. They then moved cities and things got worse when her husband started cheating on her.

Iomikoe discovered that her husband had a six-year-old son with another woman and soon after that their marriage turned so violent he tried to choke her, something he spent 30 days in jail for, but Iomikoe still took him back.

The family then suffered losing all their belongings after Hurricane Rita hit and they had to move states again. During this time Iomikoe had noticed little white spots on her body and when she eventually went to see a dermatologist she was given the news she had vitiligo.

“So many things ran through my mind. I was afraid. I was angry. How could God do this to me? I have been through so much in my life, why did he choose me? I didn’t deserve this. I thought I was cursed,” she said.

She decided to take a trip to visit her family where she met with a makeup artist who showed her how to cover her spots up. The trip had given her the confidence to leave her toxic relationship and she filed for divorce, but not without a fight from her husband.

“He made my life hell. He tried to kill me again. Thank God for my daughter, who saved my life once again. The divorce took a toll on me and my mental state. He was telling me no one would want me because of the way I looked. I had four kids–who was going to want a woman with that many kids?”

She even tried to commit suicide which gave her the wakeup call to be strong for her children and she moved near her family, got a job and bought a new car.

Soon after she was introduced to a family friend but little did she know that the meeting would trigger a major turning point in her life.

They started dating and for the first time in a long time Iomikoe was happy, but she wasn’t comfortable enough to show him the spots on her face from her vitiligo, fearing that he would lose interest if he saw what she really looked like under the makeup.

After surprising her one day at home when she wasn’t wearing makeup he encouraged her to leave the house without it.

It wasn’t easy for Iomikoe to be out in public without makeup, people weren’t always kind but those that were made her see her true purpose in life.

Today, the Louisiana grandmother works as a model, vitiligo advocate, and is a social media influencer with her own make-up line and hundreds of thousands of followers.

“I once thought of vitiligo as a curse, and now it is the best thing that ever happened to me,” she said.

“Never give up on your dreams, accomplishments, or goals. Set the world on fire. Be free and be you. And know you are perfectly painted with a purpose.”

Iomikoe has overcome so many obstacles, she could have given up at any point; she is an inspiration. Please share.